Atari has sold Cryptic Studios to Chinese online game developer Perfect World for €35 million (US$50.5m), pending the final factors of the deal coming together. I’m sure it will, which is why they announced it, so Cryptic’s ownership will be transferred over and thus Cryptic will continue under its third master after NCsoft (sure, not really a full master, but one that called the shots) and Atari.

I know this is their old logo, but I like this one better.

Internet reaction to this – as it is to most things Cryptic gets involved in – has been decidedly mixed between the good, the fence sitting and the mean. Some point out that Cryptic was bought by Atari for US$26.7m in 2008 and are now selling it for a much larger amount, others point out that Cryptic has made a loss over the past two years and has underperformed for Atari. Both are correct.

Cryptic had a bonus plan in place that would have kicked in if they’d met sales targets for Champions Online and Star Trek Online (page 11 of the 2009/10 Atari annual report) worth $47.5m all up; it appears they only earned about US$9.9m of that, which came from only STO’s performance. But that’s not the only thing – as the $US weakened, the revenue Cryptic brought in was worth less to France-based Atari. Selling Cryptic is also going to put Atari in the black for a little while at least.

And Cryptic gets to continue doing its own slightly off-kilter things for a while longer.

The Future is Uncertain
It’s hard to say what PW’s purchase of Cryptic means for the company. PW obviously wants something that Cryptic has, but exactly what is unclear. Its games? Its technology? Its MMO experience in the West? Only PW and Cryptic know.

They All Look Alike
One thing I did note was that PW’s other purchased Western studio is Runic Games, who developed Torchlight and is currently working on a Torchlight MMO. That seems awfully close to Cryptic’s Neverwinter title (although that isn’t going to be a true MMO, but more multiplayer co-op title) so I wouldn’t be surprised if Neverwinter gets the chop. It would save on royalty payments back to Atari / Hasbro for one and the work done by Cryptic on Neverwinter could potentially be re-appropriated for Torchlight with minor adjustments.

Otherwise PW launches two very similar titles that chase the same type of player and that doesn’t seem to be a particularly wise thing to do.

Pay To Play (Just Like It Ever Was)
In the same week as Cryptic’s sale it was also announced that Age of Conan was going free-to-play and that Fallen Earth had been bought by F2P publishers GamersFirst. Given that I believe the box+subscription model is falling from grace, the above confirms to me that second tier MMOs can’t sustain themselves on a small player base paying $15 a month each. These titles go into a death spiral – fewer players mean lower revenues, which means less development, which means fewer new features to attract / retain players, which means lower revenues, and so on. 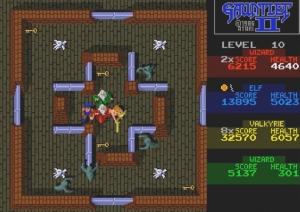 My attitude towards F2P may be shaped by my formative gamer years being spent in an arcade, playing titles like Gauntlet that stripped you 1 health point per second. Best way of healing up? Insert more money!

F2P means the player can at least test out the title substantially without having to put any money down, then decide what they want to pay. The box+sub model requires a big upfront investment (if you want to play near launch) and then a regular ongoing charge just to keep the account active. Don’t like the sub-based game at launch? Too bad, you’ve spent your money and if you want to play it again past that first 30 days you’ll have to pay more to reactivate your account (or wait for a free ‘welcome back!’ offer).

Sure, the F2P model can be implemented poorly, but it also says something that the F2P studios of the world are out buying floundering sub-based titles and not the other way around.

It all comes down to the basics – businesses need to make money to stay in operation, so they need a way of charging their customers for their goods / services. Right now the F2P appears to be working better at keeping MMOs active than the sub-model in situations where a large player population wasn’t acquired and / or retained before 2005.