With less than a week to go before City of Heroes / Villains (CoH/V) shuts down, I thought I’d take a look at the five systems that I saw offering the greatest unrealised potential for this title. I’m not going to say that if these systems had been perfected it would have led to CoH/V being bigger than World of Warcraft, but it would have been another hook to bring in and keep interested players.

PvP; or You Are What You Are At Launch

When CoH launched in April 2004, there were no player-versus-player (PvP) combat systems in place. PvP combat didn’t arrive until May 2005 in the form of arenas and it was fairly apparent in that launch that CoH had some serious problems in trying to make PvP fun for the masses.

One of CoH/V’s player versus environment (PvE) strengths were the flexibility of its powersets. There was no such thing as the typical warrior / healer / mage combat trinity and even those characters within the same Archetype played very differently depending on what powersets you selected. All this made PvP balance near impossible. Add to this the complete anti-fun effect of Controller powers that would mez (i.e. mesmerise, stun, root, sleep, etc.) opposing characters – if you are trying to PvP but continually end up locked down and unable to move while you have the stuffing beaten out of you, then you aren’t going to be PvPing for long. Let’s also take a moment to remember the early days of teleporting foes on top of a pile of Trip Mines as well for what was generally an unstoppable kill.

Travel powers also added to the confusion – you can see in the video below the amount of movement involved in just trying to get close enough to characters to activate an attack power (a process called jousting, if I remember correctly) (WARNING: SOME NSFW LANGUAGE ON THIS VID):

City of Villains came along and just added to the problems – Archetypes like Stalkers were either one-shotting PvP gods, striking and then stealthing away, or complete wastes of space that couldn’t deal enough damage to be useful. It was a mess. PvPers weren’t happy with general tinkering with powers to answer PvE player requests while PvEers hated seeing powers modified to suit the small PvP community. Then along came Issue 13 with lots of PvP changes – it’s greatest success appears to have been driving a lot of dedicated CoH/V PvPers away. It was promised that future updates to PvP would occur to keep the balancing process ongoing, but on the whole it is fair to say that didn’t happen.

All in all, PvP in CoH/V needed a lot more resources spent on it to make it important to the title or it shouldn’t ever have been introduced. Jack Emmert, CoH/V’s lead developer at the time of PvP’s introduction, later said that “You are what you are at launch,” and CoH was not set-up for PvP when it launched – a fact that a lot of time and effort was spent trying to fix.

There was another kind of direct PvP that came along with the introduction of PvP: Gladiator fights. Performing certain in-game actions would unlock ‘gladiators’ (which were NPCs from various in-game groups) that you could then use to battle things out. Think Pokemon in real-time or Myth in spandex. You can see a slightly cluttered video of it below:

Personally, this was the fun version of PvP. You had to unlock your team, but everyone could get access to the vast majority of characters pretty easily. Skill was more important than build – it was about selecting the best team and then using them to the best effect, taking advantage of any tactical blunders your opponent made.

However (and this is a big however) when the gladiator system first came out it was buggy and a lot of the gladiator characters were over- or under-powered. There was a bit of tweaking, but by the time things were more stable, most players had lost interest in this quirky sideline PvP. Other than badges I don’t remember Gladiator PvP offering up much in the way of rewards either, which is something that normal PvP did.

Which left Gladiator PvP unrealised – a unique system of pet NPC fighting that was introduced but seemingly forgotten about.

Supergroup Bases; All Your Base Are Overpriced

When supergroup bases were announced as part of City of Villains, a long-time community request seemed to be answered. Which superhero (or villain) doesn’t have a base? It’s part of the genre!

On the surface of it, what Cryptic Studios delivered was fantastic – an incredibly flexible base building system that saw supergroups (i.e. called player guilds in other MMOs) able to customise their base to an amazing degree. There were just two small problems:

Over time things were dealt with and bases opened up to be both more affordable and more useful, but the damage had been done. Most supergroups used their bases only as convenient teleporters, storage and crafting locations, meaning the potential of the system was severely short changed. A good base was a crafted thing of beauty – I’ve pulled just one video of many out there to show off what players could build for themselves:

If I remember correctly, one supergroup created a base with over 16 000 different objects in it before it went wonky. If only more people had been able to craft bases to even half that complexity the CoH/V base system would have obtained legendary status in the MMOdom.

A core aspect that sets the superpowered genre apart from any other is property damage. In genres like fantasy or westerns, knocking down a wall is a big thing; in a superhero setting, that’s just foreplay to the main event. So it was always a bit disappointing that you could send enemies flying (not that you should, since melee archetypes hated having to deal with knockback) but not damage anything in the process. Until safeguard / mayhem missions anyway.

These missions saw heroes (villains) perform tasks such as stopping (pulling off) a bank heist, preventing (causing) cars being blown up, capturing (stealing) illegal weapons and disarming (arming) bombs. All the while a timer ticked down and if you didn’t manage to stop (pull off) the bank robbery in time, the mission was counted as a failure.

Unfortunately only a limited number of safeguard / mayhem missions were available in-game and only unlocked after you’d run enough errands. This was always a system I wish had been expanded so that it was a race against the clock to blow things up more frequently. Here’s an example video (along with a customised theme song!) that shows a Mayhem mission in action:

When Warhammer Online unveiled public quests I remember feeling a bit perplexed about the amount of attention they were receiving. After all, a zone-related event where all players could join in to complete a group task was something I had seen in Paragon City for years. (Yes, it wasn’t exactly the same, but that’s the way I felt.) 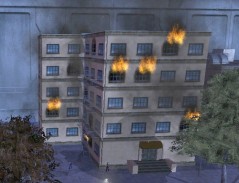 And now all it needs is marshmellows. Or some heroes to come along and put out the fire.

There were a wide range of zone events to complete – you could try to stop the Clockwork monster Paladin from going on a rampage in Kings Row, a ghost ship would sail through Talos Island, arson would be started in Steel Canyon that needed to be put out, a giant squid needed to be put down in Independence Port, and so on. During the early days large groups of players would heed the call of these zone events and converge on them, leading to the kind of mass group combat that made CoH/V shine.

But that was early on. Where zone events fell down (and where public quests evolved the concept) was that outside of some badges and normal rewards, there was no real reason to take part in a zone event more than once or twice. A player looking for character advancement and in-game rewards (e.g. salvage, influence) was better off avoiding these events entirely. And even if you successfully completed the event, there was no message telling you that you’d won – it just ended.

Which was a pity, because there was a unique kind of heroism in fighting off arsonists and saving a building from destruction, but it only worked if you could gather at least a small group to that location. With a bit more refinement zone events could have been turned into interesting and repeatable content – CoH/V already did scaling events well, so it wouldn’t have been out of the question to make it worthwhile for a lvl 1 character and lvl 50 character to both have a shot at (say) helping break up a strike on the docks and get rewards from it to make their involvement worthwhile.

Again, I’m not saying that any of these systems would have “saved” CoH/V, but they were systems that never quite lived up to what they could have been, despite the attempts behind them.