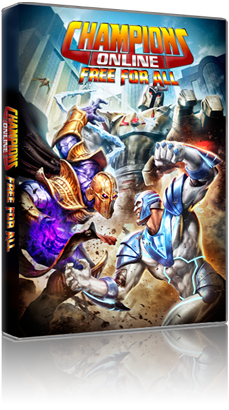 The 80's called and they want their pen-and-paper RPG art back.

Massively.com recently asked the question about how important subscription numbers are to consumers. On an immediate level they probably aren’t vital, but longer-term they point to a game’s survival and potential to be a success. This is especially true for MMOs launched since 2008 – their typical active player numbers have seen sharp declines since launch, more resembling ski slopes than healthy growth potential.

Which is why I’m interested in how many copies Champions Online sold at launch. Cryptic didn’t say how many copies they’d sold, possibly because they’ve seen how trumpeting that you’ve sold huge numbers when three months later your retention rate is less than 50% works out for you. In short: badly. It could also be because they didn’t want to be compared to Aion, who was releasing in the same month and had more pull as a title. Or maybe they are pulling a Turbine and not getting into announcing their player numbers on principle. Instead, what Cryptic did reveal is that about two months post-launch over 1 million characters had been created in ChampO – a pretty meaningless statistic when it comes to assessing active player numbers.

So, apart from that 1 million characters figure, what other data is there? Atari won’t be releasing any financial reports that include September 2009 for a while yet, so that’s unavailable at this point. What is known is that Champions Online was the third most purchased PC box title in September 2009. Now, the PC monthly sales charts are a sad place to visit, given that sales numbers aren’t given out probably so that PC box sales don’t look so pathetic next to console box sales (Case in point: Wolfenstein launched in August 2009 on multiple platforms and bombed, selling just 106k boxes. 17k of those were on the PC, which still got it to #7 for that month’s top PC box sales – by comparison, the #7 selling non-PC title sold 130k copies, while the 59k sales for the Xbox 360 version of Wolfenstein got it to a non-PC chart #18).

Aion was the most popular title in September 2009 and NCsoft has indicated they sold 970k boxes in Western markets – since it launched end of September 2009, all of those sales would have been launch sales. It gets tricky to compare ‘box sales’ to ‘copies’ because of digital downloads, but NCsoft’s own financials refer to those numbers as box sales. However, even that 970k isn’t so straight forward, given that there was also an Aion Collector’s Edition at #5 in the PC box sales chart. So, what kind of proportion of ‘normal’ to collector’s editions might there be?

Age of Conan released those kind of figures when 111k Collector’s Editions sold out along with 700k normal editions when the title launched, while eventually about 1 million boxed versions of AoC were released. That’s about 11% of all boxes being the more expensive collector versions. Although that kind of proportion makes sense to me, it is also the only kind of data I can see on collectors versus normal edition sales for the PC – if anyone has any further data / links, I’d be interested in seeing them.

If AoC’s experience is similar to Aion, about 11% of that 970k box figure were collector editions, which is about 107k. This would mean that about 863k normal boxes were sold for Aion, putting ChampO’s box sales somewhere between 108k and 863k. Free data on sales for The Sims 3 (#2) and World of Warcraft: Wrath of the Lich King  (#4) for September doesn’t seem to be available, so right now we move from “trying to take an educated guess” to “throwing a dart while blindfolded”.

I know it's a guess-timate. I'll be interested to see how right (or wrong) I am.

If there really are about 1 million players just waiting to jump into the Next Big Thing MMO, then ChampO certainly attracted some of them. But probably not to the same extent as for Aion’s launch – for one, there were quite a few MMO players saving their money for Aion to launch in the same month and secondly because ChampO was trying to do something a bit different for a MMO (different genre, different server structure, different character creation, etc – final quality of execution is up for you to decide). Difference is a barrier to entry, so it probably kept some players away.

Given how top loaded most sales charts are – the top few titles can often sell more than the rest of the list combined – it’s likely that ChampO sold closer to the 863k figure than the 107k figure. As a stab in the dark, I’d say that ChampO was looking at 400k – 500k box sales at launch, which isn’t bad at at all. If I wanted to be optimistic, I’d go as high as 600k boxes, but I think that would be pushing it.

On top of this, ChampO also was #1 for digital distribution sales by revenue in its launch week on both Steam and Direct2Drive. So for launch, ChampO did pretty well for itself.

Player retention to this point however is probably another story for this title, but that’s a different topic to cover.

Here's what it is all about.

One of the things that was noticed is that it didn’t take long for discounted ChampO box offers to start appearing. This led some to assume that ChampO’s box sales weren’t that hot so they’d started slashing prices to move them. There are two potential reasons I see for this:

1) ChampO’s box sales weren’t so hot so they started slashing prices to move them. If someone at Cryptic / Atari had 1m boxes printed, or if negative word of mouth after the launch day patch was really that bad, then this is possible.

2) Someone realised that ChampO had about 20 days at which to charge a price premium before Aion launched and stole their thunder.

Discounting box costs towards the end of the month could have been a driver towards ChampO’s overall position in the PC games sale chart, but ultimately post-September 21 Aion was the hot seller. So most of the sales would have been made during the early launch period, before Aion came and the discounting was applied.

7 thoughts on “How Many Players Bought Champions Online At Launch?”