It is sometimes said that the launch of a new MMO never really ‘kills’ an older title. The older MMO might lose some players but will continue on in its own way with its already established community and developer Vision.

That might have been true once, but it is increasingly less reliable to believe in. There’s a good case that NCsoft’s shutdown of Lineage in North America was strongly assisted by the launch of RIFT and players moving to this new fantasy title. Now Sony Online Entertainment has announced that their Star Wars: Galaxies (SWG) will be closing in December, which is pretty close to when some expect EA / BioWare’s Star Wars: The Old Republic (SWOR) to launch.

A Blow to SOE

This is bad news for SOE that adds to the string of bad news they’ve been experiencing recently. SOE’s MMO model has been one of keeping older games going as long as possible because they all add to the attractiveness of the Station Pass and its ‘play all these games for one price’ set-up. Sure, not every game will be to your taste, but even if you only want to play 2 games on the list, it makes sense to pay for Station Access. 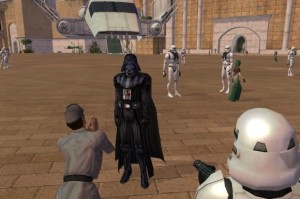 A stay of execution is unlikely for SWG, no matter how much begging goes on.

SWG is one of the more recognisable titles on that list. Even with the launch of SWOR it makes little sense for SOE to cut SWG due to fear of EA stealing players from it. It would happen, but SWG and SWOR are arguably chasing different player types and there is always the chance that with “[p]opulations [staying] pretty steady for a long time now” then they’d remain fairly constant at SWOR’s launch (or rather the sub revenue would remain constant, even if SWG players tried out SWOR).

Hell, even if SWG’s players deserted it the day that SWOR launces, cancellation can come after such things are confirmed. Perhaps SWOR doesn’t launch until 2013 – shutting SWG early only depribes SOE of a cornerstone sandbox title before the state of play is known.

Instead it looks like SOE is canning SWG because it can’t reach an agreement with LucasArts over the next contract. Perhaps LucasArts wanted to raise the royalty rate, or force SOE to take some series of actions that they weren’t comfortable would pay off (such as increased development expenditure on SWG, or some kind of ‘do not compete’ clause). It also wouldn’t be much of a surprise if EA has been very ambitious when talking to LucasArts about the future of SWOR, so that SWG looks very much like the poor cousin as a result.

SWG’s cancellation announcement  has allowed multitudes of players to drag out their New Game Experience (NGE) stories and to yet again ‘what if’ a tale that has already been dealt out. It will also be interesting to see if LucasArts or EA go after the SWG emulators (like SWGemu) on the grounds that they aren’t officially sanctioned Star Wars MMOs.

5 thoughts on “Star Wars: Galaxies – End of the Universe, Driven by the Republic”