A while ago I was asked to show some evidence for my cynicism about the delivery of Kickstarter-funded video games, that it was a site (to steal someone else’s quote that I now can’t find) where the unaware fund the unprepared. I couldn’t see that anyone else had done it, so I created this spreadsheet that lists all successfully Kickstarted video games since 2009. I’ve included video games and gaming peripherals in that list, but any “fund this gaming event / blog / new site” items have been ignored (because they are really a whole separate other area).

So let’s answer the question: do video games that are Kickstarted actually deliver the title they are promising (from 2009 up to the end of October 2012)?

I’m sure some people will look through that list and spot mistakes – titles I’ve missed, numbers I’ve got wrong, projects that have updated since I looked at them. This data was collected by manually scraping the data off the Kickstarter pages and the official pages of the title / studio in question. Sometimes there was conflicting information about an estimated release date. The list was started over a month ago and it is a bit hard for me to check all 300+ entries to see what’s changed every time I look at the sheet. Any mistakes I’ve made are a case of human error, not intentional alteration of data.

It also only includes titles that were classified by Kickstarter as “Video Games” – if a video game title was only classified under “Games” I’ll probably have missed it.

If you let me know of any errors or issues, I’ll look to update the spreadsheet and analysis.

It’s pretty safe to say that Kickstarter blew up for video games in 2012. In 2009 only 5 video games were listed on Kickstarter and they managed to raise a bit over US$21k; in 2012 to October 31 there have been 207 listings that have raised over US$40.3m in pledges. That’s some massive growth.

Let’s look at that year-on-year: 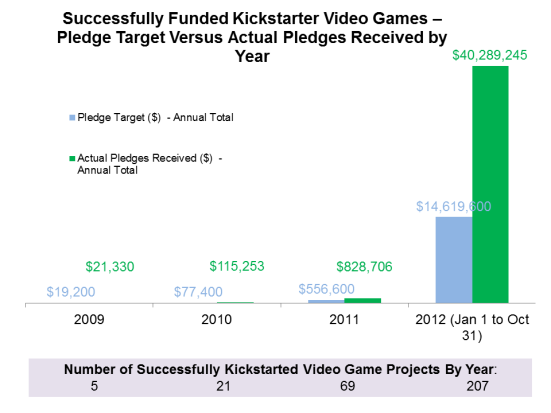 The total amount of money raised through Kickstarter for video games in 2012 is about 40 times bigger than the sum of 2009 through to 2011.

You can also see that Kickstarted video games are overall attracting a lot more money than they have in previous years, but that’s due to a few projects going massive rather than lots of titles receiving large excess funds over their target. It’s important to note that despite the media attention put on the multi-million dollar Kickstarters, within video games the median amount raised per project is $10.7k.

If you want to refine that median to 2012 then it goes up to $14.6k in actual pledges, but that’s still not a lot of money for video game production. (Average Kickstarter success amounts are higher than that – $136.6k for the entire 2009 to 2012 period and US$194.6k to date for 2012 – but average results are substantially effected by outliers, which is something that Kickstarter video games have a number of.)

If you look at a breakdown of how actual pledge amounts are distributed, you can see that despite the focus on US$1m+ (or even US$100k+) successful projects, the majority of successful video game Kickstarters are taking home less $20k or less. 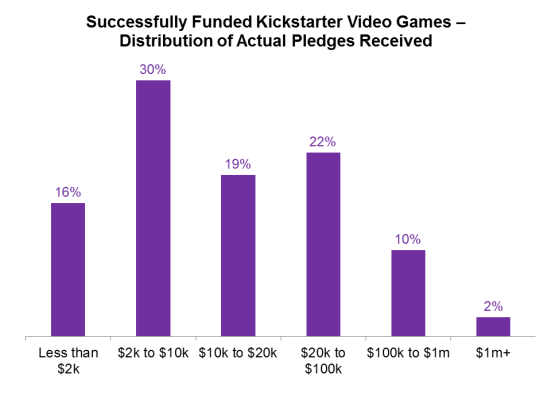 How actual pledges are distributed is just something to keep in mind the next time you see someone say, “They should just set up a Kickstarter!”. The majority of successful projects aren’t actually bringing in huge dollars. (The chart shows all successfully funded Kickstarter video game projects from 2009 to October 31 2012.)

To provide a bit more granularity to the distribution of project numbers I’ve also created two that show Kickstarter video game successes by month. Let’s start by looking at the number of successful projects: 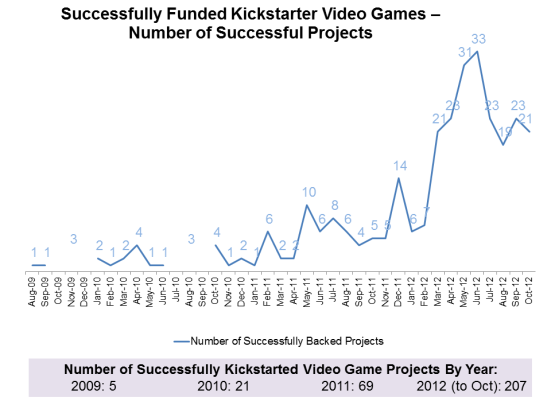 For those looking for reference points, the Double Fine Kickstarter was in March 2012.

Again, this just shows the growth in the number of Kickstarted video games reaching (and exceeding) their fundraising target. Right now Kickstarter is successfully funding 20 to 30 different video game projects a month. It will be interesting to see if that rate holds up. Kickstarters need people aware of them if they are to have a chance of reaching their pledge target and 20 – 30 new projects a month would seem to clutter things up relatively quickly.

I had tried to overlay the actual pledge amount raised onto the above chart, but the rapid growth in the dollar figures in 2012 throw everything out of whack. So here’s a separate chart that I’ve had to use a logarithmic axis (base: 2) to fit the dollar figures into a reasonable looking chart: 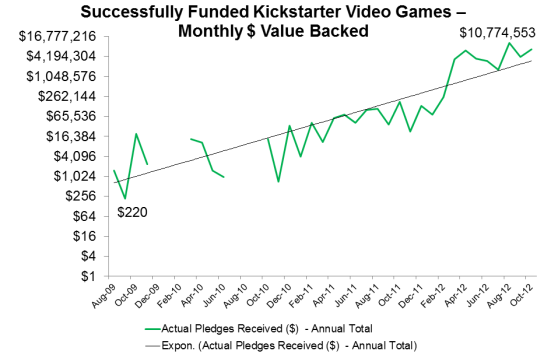 August 2012 hit the heights because the OUYA was funded then, account for US$8.6m of that sum. Even so, the Kickstarter video games section has been on an exponential climb for a while now.

All of the above stats are interesting (well, to me) but they are only about how much of a boom Kickstarter has had with video games, not about how many video games have been delivered as promised following Kickstarter funding.

This is where things get a little tricky, since no doubt people will argue about the definition of ‘delivered’. I’m only considering titles that appear to have delivered on the majority of what their Kickstarter funded as ‘delivered’ and in most cases decided not to include anything with a backer alpha / beta on Desura or similar (unless that is all the Kickstarter pitch promised). If a developer promised a full copy of the game on launch, then that’s what I’m considering to be ‘delivery’. In some cases a developer has promised a title on two different platforms (say iOS and Android) but then only delivered on one; in those cases I’m considering the game delivered because it is out there and purchasable.

How well do Kickstarted video games deliver on their titles? About 1 in 3 since 2009:

The launch figure is ‘ever launched’ by the way, not just delivered in the same calendar year.

It’s obviously too soon to tell if this trend holds true for 2012’s titles, but it does point to an issue that backers should think about seriously. Only 5 Kickstarted video game projects have been officially halted, but there are a lot of projects that stop providing updates or make announcements that the developers have “made the difficult decision to start rebuilding. From scratch.“. Delays in delivery are exceedingly common – the Kickstarted video games that are delivered are on average about 2 months later than the developers originally predicted.

Of those titles delivered, about a third are mobile games, which is also something to think about given that Kickstarter is often seen as the most appropriate for PC title development.

Where a released title is actually notable enough to be reviewed, overall review scores are generally positive, so at least Kickstarted video games are delivering a degree of enjoyment / quality if they are able to make it into the hands of gamers. Quite a few Kickstarter-backed projects languish in obscurity though.

The crucial test of Kickstarter video game delivery is from now (November 2012) up to March 2013. This period has 65 titles originally scheduled for release, including the Double Fine adventure, Tex Murphy – Project Fedora, Shadowrun Returns and the OUYA launch. If game studios can’t launch their titles within the time period indicated in their Kickstarter pitch, I can’t help but think that backers will become disillusioned and that pledge money will become a lot harder to obtain moving forward.

Getting an idea that 2 out of every 3 Kickstarter video game projects are yet to deliver (ignoring 2012’s efforts) isn’t something that has changed my mind on the topic of Kickstarter. I’m not really interested in letting someone else roll the dice with my money so that they can work on their dream project, especially when I’ve got the luxury of just buying the title at the other end if it ever launches. Backer rewards don’t really get to me (although some of the t-shirts have been fantastic – someone should licence and sell them) especially since Kickstarters have gone towards offering in-game benefits rather than real-world benefits… and as pointed out, only 1 in 3 titles actually get delivered.

Feel free to conduct your own examination of the data and come up with your own interpretations. At the very least you can use it to look up which Kickstarter video game project is due out next.