Browser-based MMOs don’t get that much respect, often seen as the poorer, weaker, simpler cousins of client-based MMOs. In many cases they are, but with that simplicity comes the ability to experiment more because mistakes might only cost a few thousand dollars compared to the hundreds of thousands, if not millions, of dollars required to develop the client-based title.

Realm of the Mad God is one of those browser games that throws a lot of experimental things together and I can’t help but feel it sticks together pretty damn well. You can only have one character at at time and there is permadeath, but this is balanced by a short levelling curve and that hitting max level with characters unlocks other classes. Calling itself a “co-op fantasy MMO shooter”, combat is simple but fast – move with your keyboard, aim and shoot with your mouse. 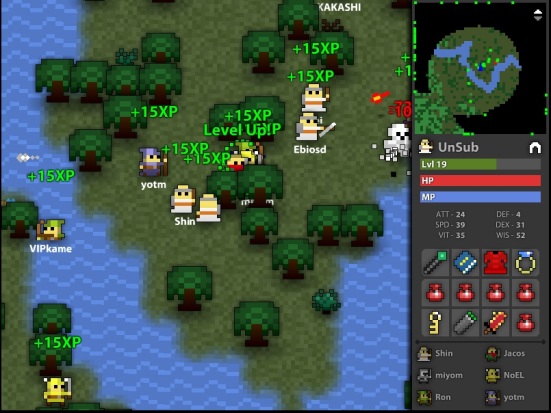 You kill something, everyone on the screen gets XP. Groups form up - and break up - quickly and easily.

ROTMG has a number of neat features. When you kill something, everyone on screen with you gets the same level of XP, so there are some distinct advantages in hanging around others above simple survivability. It also means that going up against the largest monsters in the game with a big group of players is the best way to level up (but lots of gravestones mark out the risk vs reward outcome of that decision for many characters).

Ninja looting is common, but fortunately equipment isn’t too hard to find and the developer wiki is informative about where to find particular items for each class. Every class has a weapon and a special secondary ability – Rogues can go invisible, Fighters can speed up those players around them, Priests cast area heals, Rangers can fire hard-hitting arrows, and so on.

Another great function is the ability to teleport to another player’s position, so that you can move around the map quickly (and join large groups of players taking on something big). Of course, teleporting right into the path of a raging Medusa is pretty much guaranteed death (if you can’t hit the lobby button quick enough, of course) but that’s part of the risk.

If you do die, it is simply a matter of starting with a new character and perhaps a change of class to see if that one works better for you. The conservative player can easily hit max level without putting their character at risk, but it is thrilling to join players launching an absolute wall of fire power against waves of enemies – the difference between death and glory can be quite slim at times.

Every time 25 000 monsters have been cleansed from the game world (and given that everything wants to fight the players, this doesn’t take too long) all players in that world are teleported to a dungeon to take on Oryx, the Mad God himself. Because teaming is automatic, it is very simple to join a large group of players in this dungeon and try to take out the more powerful monsters, hoping to survive long enough for the good loot. If you can get there before someone else, of course.

Graphics are incredibly basic, but I think that just adds to the charm.