Recently I read an article that wanted more truly adult movies. Not adult in the “more swearing, more boobs, more close-up shots of exit wounds in slo-mo”, but adult in the sense that they require some maturity and engagement to understand, adult in that they aren’t scared in the use of silence.

I thought of this when I heard that Gearbox said they were concerned about censorship issues around Duke Nukem Forever, and the possibility of people being punished for their “creativity” (said creativity kicking off with a point-of-view urination scene and ending with a slightly-off-screen FFM sex act).

There’s an interesting disconnect in how the video games industry says it is mature and ready for respect, and what it actually releases.

It's sad when one of gaming's more acclaimed moral choice systems boils down to, "Do I break open the little girl and get the sweet, sweet nectar inside, or free her from a life of bondage?". Character rewards are pretty much the same for either decision path.

Gamers tend to get defensive on the issue on if games are truly mature, or make any meaningful cultural contribution (not impact; contribution). “Hey, UnSub,” you aren’t saying to yourself, because no-one really talks outloud to a blog, “There are plenty of movies with dick and sex jokes.” Yes, there are, and some are very funny. But they aren’t the artistic pinnacle of the medium – film gets “Rashomon” to go along with “The Hangover”. Movies get a mix of titles that explore big and difficult issues alongside scatological references or explosive dismemberment material. Video games don’t get much of the former, but do see plenty of the latter. It’s a reason why video games are such an easy target for criticism.

Gamers typically brush off those criticisms with, “It’s just a game and I’m having fun.” Unfortunately that’s an argument that will see video games remaining at bottom of the barrel in terms of cultural acceptability. It’s hard to argue that it is important for players to be able to see individual bone fragments emerge from wounds they inflict in-game because the title / industry is ‘mature’ when all that is being displayed is technology-fuelled gore for its own sake. Movies can at least talk about the gore being shown for a particular reason that is offset by another – say, a message on what happens when life is cheap, or to drive home the morality of a man’s behaviour. Games rarely journey down that path, remaining as pure power fantasies.

As such: Duke Nukem. Duke Nukem 3D was a successful title, sure, but as a game it was inferior FPS to Quake. It did have more blood, boobs and more dialogue (often stolen from Bruce Campbell’s work) which is what brought it an audience and also lots of controversy. However, this was 14 years ago. Duke Nukem Forever seems poised to do it all again in a higher resolution and potentially use the same kind of excuses – it’s just a game, so what if the women are just T&A and the gore gratuitous? 3D Realms Gearbox knows exactly what kind of controversy storm they are heading into and appear set to milk that for all the free publicity they can. Gamers will help them by getting outraged over the merest hint of censorship. Great for DNF sales, probably not great for people trying to get video games taken seriously.

And if video games aren’t taken seriously, it makes it very easy for restrictive legislation to be put in place because “if it is just a game” it doesn’t need to show multiple player-caused homicide or involve nudity at all. Games are mostly for children, after all.

In going back to the idea of games that require some kind of engagement / maturity to understand, I can only sadly come up with a short list of times when I think I’ve come across it (and below isn’t a comprehensive list, just the ones that came to mind quickly). Maybe I play the wrong titles. Maybe video games don’t do silence well. 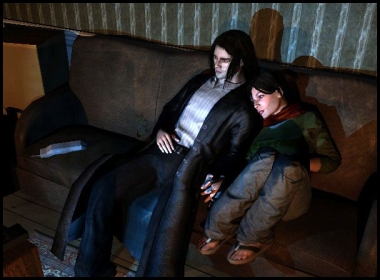 You can sit together and watch "To Kill a Mockingbird". She falls asleep. It's a pretty honest depiction of a normal relationship for a game where you summon shadow demons.

However (outside of Silent Hill 2’s plot twist) most of the things listed above are footnotes to the main gameplay elements of killing lots of things. Most titles aren’t brave enough to let players experience silence or moments of contemplation, because that risks players becoming bored and skipping the cutscene. However, it is into the silence that video games have to start to go, to gain the ability to portray something emotional without a narrator, subtitles and things being spelt out repeatedly for the player. It’s only when video games can start to convey emotions without resorting to “I am sad / tell me why you are sad / I am so sad now”-style dialogue, or ridiculously over-the-top choices that have no real in-game downsides either way, that games are going to start approaching the status of being art that so many in gaming want.

It’s one of the reasons why I think that games currently aren’t art, but that’s a topic for another time.