The Australian Bureau of Statistics (ABS) released a mobile title called Run That Town, where you play the role of a local government leader. You are given 10 years to manage your area and at the end of that time you are either run out of town or given a parade. The ABS comes into it through the choice of starting ‘area’ – you enter an Australian postcode and the demographics of the real world area are used to define the characteristics of the area you govern. 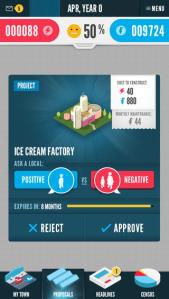 There are two sides to every decision. Your best option is to go with whichever side has more people. (Image sourced from: Apple iTunes)

Although you earn money from your area, plus use your political clout to see projects constructed and events held, the only metric that really counts is Popularity. Before you make a decision you can ask the locals to find out the positive and negative reactions to it. Provided more people support an idea than oppose it, your Popularity will go up. It’s not always straightforward – it may appear on the surface that two demographic groups are polarised on an issue – but the trick is to know the sizes of different demographics in your area. As an example, if you have more people who drive to work in your area than families with children, it’s worth building on the freeway to get motorist support while ignoring concerns about kid’s health.

It paints a cynical (and probably unintended) view of government, where the key decision making criteria isn’t, “Is it going to be a good idea for the community to have this service / event / building?” but is instead, “Is it going to make me popular?”. If there aren’t enough unemployed in your area when the idea of an unemployment office is floated, sucks to be them, but it is against your leadership interests to get it built. It doesn’t matter if casinos have any kind of real-world negative social cost if enough people in your area want to see it built.

As a Run This Town leader, your only real goal is being as popularist as possible. 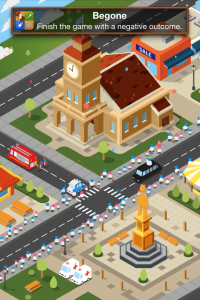 An example of a bug I found with Run That Town was completing the game with 100% popularity and getting that ending, but getting the achievement as though I’d failed and been run out of town!

With another “bureaucracy simulator” Papers Please getting some attention for being a politically-flavoured game, Run That Town provides a point of contrast. Its political commentary is less overt, but both Run That Town and Papers Please have something to say about the nature of government and how it interacts with the people under its care. In Papers Please, the statement is one of top down control: you do what you are told by your leaders to do because it is in your best interests. In Run That Town, the control is more bottom up: it’s in your best interests to do what the masses tell you they want.

Short Review for Run That Town

Overall, I found the game to be very engaging. Every month only takes 60 seconds to complete, a year is over in 12 minutes and one entire game can be finished in 2 hours. It is well suited to the pick-up-and-put-down nature of mobile gaming, with the presentation being bright and colourful. I wouldn’t say that Run That Town is actually funny, but it tries for some subtle humour at some points.

The gameplay is pretty simple to pick up. Negatives included the difficulties around being able to interact with your ‘town’ once you had dozens of projects built, some of the UI aspects could have been a lot smoother and there seemed to be some gameplay bugs like screen freezes and badges not unlocking at times. But none of these are major barriers and it was a title that kept me coming back to finish it. Of course, once I found the best strategy was to just go with the majority and reject the rest, it became a pretty simple title to finish with 100% popularity.

Overall: it’s free and worth a shot.

One thought on “Run That Town: For The Masses”