There have been a number of articles out recently about how the successfully Kickstarted Haunts: The Manse Macabre has announced that it is in a lot of trouble – it has no programmers and is currently looking for another studio to help finish it. Rock Paper Shotgun wrongly called this “the first Kickstarter funded gaming project to meet the fate of so many privately funded games” but that’s not true – looking back through the list of successfully funded Kickstarters it looks like it was Liquisity 2 in July 2010 that was the first Kickstarted title to throw in the towel. If this is the first they’ve spotted, they haven’t been looking very hard.

You can see more about Liquisity 2 on its creator’s website.

There have been more since, but it is rare for a developer to actually announce their issues like Mob Rule Games’ Rick Dakan has.

(For those of you playing at home, yes, this the same Rick Dakan who helped co-found Cryptic Studios and designed a lot of the early lore for City of Heroes / Villains. And then got let go from Cryptic and wrote a book about a fictional someone taking revenge against a video game studio that fired them.)

By being so open about what is going on, Dakan has arguably helped make his project the target of a lot of anti-Kickstarter (or at least cynical-about-Kickstarter) sentiment.

Which is where I come in, I guess.

(Getting a bit less attention is Loot Drop’s decision to pull their Kickstarter when it is clear they are pretty unlikely to get the $1m they asked for. I’m sure they’ll be back, but they are another project that should be looked over and learned from.)

The appeal behind crowdfunding is that developers get the freedom to develop what they are interested in while the crowd gets to choose what they want to support. There are no EEEE-VILLL suits in between, aiming to crush developer creativity and simultaneously forcing players to buy games they don’t like… or so the theory goes. What seems to be missing in this equation is the middle step of developers actually delivering on what was promised and for the funds they requested.

A big issue to remember here is that a successful Kickstarter doesn’t mean a successful project – it just means that the studio raised some money from a crowd of people. Delivery of what has been promised is a whole separate issue. Ideas are easy; actually turning those ideas into something that is both tangible and resembles the original concept is hard.

I remember Wizball – the greatest “flying ball that shoots things to collect paint in order to turn into a wizard” game ever created.

I’ve been reading developers talk about how great their title is going to be for something like two decades, back to when I’d buy Zzap!64 from a newsagent. You know, back when 8-bit graphics were like that because they had to be, not because of a design choice. In that time, I can’t think of a single developer who said when discussing their upcoming title, “This game is terrible and no-one should buy it. I don’t deserve the money.”

They don’t do that because – even if in their heart of hearts they can see the problems – there is always the belief that a last-minute save can be pulled off, so why deter players from giving you an income? Or it was the publisher interfering too much, or it was someone destroying all your marketing materials, or some other reason why the game doesn’t deliver. Not your fault you couldn’t deliver on what you told the gaming press in numerous pre-launch promotions.

And a video game on Kicksater is worse than that,  with the developer pitching to a large group directly for cash. It’s a job interview, with the Kickstarter page as resume. If you don’t sell yourself, you aren’t going to get those pledges and if you don’t get the money, it’s back to developing bank software for you.  So you are going to be pretty positive when talking up your game.

It’s not that people will intentionally go out of their way to lie on a Kickstarter pitch. It’s just in their self-interest to be optimistic.

Which is why Kickstarter’s new risks and challenges section is a complete joke. To begin with, they are at the very bottom of the Kickstarter page (with the Loot Drop Kickstater, it is over 20 screens on my laptop before I get to that section – how many people go that far?) and the answers to that section are of the “my biggest problem is that I work too hard and everyone likes me” humblebrag variety. Loot Drop’s risks and challenges basically says “we have shipped a lot of games and know how to deliver”. There are zero risks and one vague challenge (“RPGs are hard… but we’ve delivered a lot of them!”) in that section.

“There are no problems here, and if there were I’m sure that someone would say something.”

With Mob Rule Games and Haunts, it is a clear risk that their programmers weren’t going to be around if the required development time ran over, but in an email to Forbes Dakan indicates he never even considered that would happen so wouldn’t have listed it as a risk anyway. And this was with a studio that said they’d be as transparent as possible but – as is very natural – found it very hard to deliver bad news about itself. (Haunts was launched before Kickstarter required them to “formally” state risks and challenges, so that section isn’t on their Kickstarter page.)

During the period of time that the Double Fine Kickstarter really broke Kickstarter as a funding concept, Tim Schafer made the point that even “simple” titles can cost a studio US$2m to US$3m all up. However, that much is too much for players to fully cover most of the time – the median amount raised by a successful Kickstarter video game project is in the US$10k to US$12k range. That’s a big gap, and admittedly not entirely a fair one if we are talking studio versus 2-person development team. 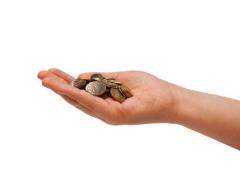 Here you are, developers! Now go make me an 80-hour RPG with cutting edge graphics and full voice overs, stat!

But hopefully it helps serve the point that simply being Kickstarted doesn’t equate to a studio with the finances to actually deliver what has been promised. Because as much as the idea of Kickstarter is that the crowd will fund the games it wants rather than letting publishers decide, the amounts that players are willing to crowdfund do not match the amount of money required to make the kind of titles players say they want.

Even the fact that Haunts is being considered as being “crowdsourced” in terms of funding seems curious to me, given that although they received US$26k from their Kickstarter, they received a much larger amount – $42 500 – from the Lewis Charitable Foundation. You can also see that Mob Rules’ own budget for development puts costs at US$74k. That’s also a large gap between what was crowdfunded and what was actually needed (and in a world before the programmers left at that). 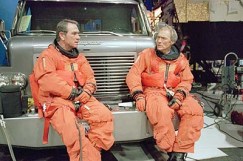 Whenever I see the name, “Space Citizen”, this is what I think of.

Chris Roberts’ Star Citizen is another good example of this crowdfunding gap – it is looking to raise US$2m from the official site plus another US$500k from Kickstarter for a project that  is actually budgeted to cost US$12m to US$14m to develop. This particular gap is going to be filled by private investor capital once crowdfunding has been completed.

So even in situations where people are putting money into a gaming-related idea to see it developed, they are still aren’t really paying enough to make it actually happen – it’s more a partial downpayment. The Serious Investors will be along later to actually cover the tab.

At some point a Kickstarted game will sell itself to a publisher and a lot of people will get upset about it, but it’s pretty obvious that if crowdfunding is only covering about a third of development costs, the rest of the money has to come from somewhere.

So what does this mean for Haunting? I actually believe that it will come out – someone else will pick it up and all the media attention for a game that is allegedly almost complete has meant that offers of help have flooded in.

Publisher: “That’s right, we’ll be here for a long time to come! Remember to tip your waitresses and try the veal! It’s actually cat!”

Hopefully this event has a wider impact on the ideology that Kickstarter and crowdfunding would somehow ‘save’ video games, because it won’t. Unless gamers are willing to foot a lot more of the development bill, it is still going to come down to large investors (such as traditional publishers) to support most of the budget for all but the most indie titles.

Actually getting the money is also only the start of the process, with delivery on the core game promise a whole different issue. Given that the history of video game development is filled with titles that run over-schedule and over-budget, what happened to Haunts (and to Liquisity 2, and to Rapstar Heroes and to all those other MIA Kickstarted titles) is only the start of a potentially painful learning process for the cheerleaders of video game crowdfunding.