In order to fill out my spreadsheet and gain some firmer data on how many successful video game Kickstarted projects actually deliver, I have to work my way through a lot of Kickstarter pages. To date I’ve come across a few cancelled projects, a few dodgy projects but to date I don’t think I’ve come across a project that’s made me go, “Huh? Wha?”. At least, until now.

If a video game has been successfully funded, I look to find some kind of evidence about what is happening with the title. I don’t usually look at pledges, or reward levels, or anything other than, “When did they say this title was coming out?” and “Has it actually come out?”. In looking through one particular project, going to the linked ‘official’ site turned up a very bare bones page with nothing about the title on it, so I went back and looked closer at the Kickstarter page, which raised a few odd things.

First off was the amount this title had earned given the number of backers it had:

On average, each pledger kicked in over $275 to make this title happen.

Those are some pretty generous backers! Maybe the reward levels were… hang on, this doesn’t look right:

That’s only 3 pledgers. And there is no way they put in anywhere near $1651 between them.

Yeah, only 3 pledgers there, despite the project being successfully funded with 6. The reward levels were only about getting thanks for supporting the title, name added to the project list, CD with the game sent, blah blah.

Okay, let’s look at those pledgers. There are six listed, but I’ve noticed some discrepancies there too: 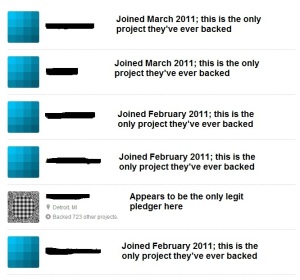 Only one of these pledgers appears legit, with an account created outside of the title’s Kickstarter window (as well as a hell of a lot of pledges made).

So, it appears this title managed to get successfully funded with six people providing the money (five of them for the first time), but only three pledgers actually appeared in the reward levels and those combined contributions don’t appear to get anywhere near the successfully pledged amount. The official site barely lists any information at all, with nothing about this title.

I did think about naming names, but there is a chance that this is a legitimate project that just looks incredibly odd. Perhaps three people did withdraw their support after the Kickstarter closed and that then removes them from the reward list. But IF I were the kind of person to wonder if scams are conducted on Kickstarter, I would wonder about how easy it is to create a range of fake accounts that then pledge money to a title in order to get it successfully funded. And if Kickstarter monitors that kind of thing.

I’m not saying this is a scam (and certainly not a particularly successful scam at that) but when projects like this sit proudly on the successfully funded video game list and help bolster Kickstarter’s image I wonder who is actually checking that things add up.

6 thoughts on “Kickstander: When the Numbers Don’t Add Up”