Funcom’s Q2 2012 financial report paints a bleak picture for the company. Only 200k copies of The Secret World (TSW) were sold, which is a long way behind their Age of Conan’s (AoC) 800k during its launch period. Funcom previously said they expected TSW to do only half of AoC’s launch year revenues, but this figure points to results that could be closer to a quarter of that result.

Funcom appear to have grossly misunderstood their market when launching TSW. I’ve seen a number of articles mentioning review scores – which Funcom do mention – but factors such as the launch of Diablo III and build up to Guild Wars 2 had to have hurt a lot as well. A bit of forward planning would have (and probably did) identify those risks, but they are convenient scapegoats now. Potential TSW players have elected to hold onto their money or spend it on other bigger, better known games that were also played online. 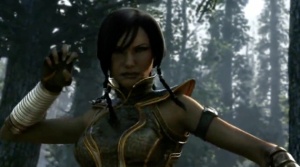 SWOR actually had a bigger impact on Funcom that Tom Chick ever could.

What also had to hurt was Funcom not recovering from a near halving of their revenue from Q4 2011 to Q1 2012. I best a lot of people internally thought (hoped?) that with the launch of TSW the money would start to refill and the coffers would rebuild; instead the launch of TSW has only seen revenues increase by about 12% from those reduced levels while costing Funcom a hell of a lot more to get there.

Funcom’s reports indicate that AoC’s revenue is down due to the launch of “a competitor” that I’m guessing to be Star Wars: The Old Republic (SWOR). What’s interesting is that despite SWOR’s problems, those players aren’t coming back to AoC.

Oh, and here’s a fun fact: it looks like Funcom’s last profitable quarter (by EBIDTA, anyway) was Q4 2010. The company has spent around a year and a half eating into its cash reserves.

It’s for those reasons that Funcom is cutting its staff numbers by 50% and looking to get its LEGO Minifigures MMO out the door ASAP. It desperately needs to start becoming cash flow positive, because the US$16m it has in cash isn’t going hold out indefinitely. Now, I’ve been told that Funcom might easily go out and find investors given Norway’s particularly friendly laws in this area, but I have to assume that those investors want to earn some money back at some point in the future.

Earning money isn’t something that Funcom has shown an ability to do recently.

6 thoughts on “The Secret World: Only 200k Copies Sold”