One of the things that the Newbie Blogger Initiative is meant to do is provide some tips and hints about blog writing. So here goes…

My MMO writing career started with The Paragon Beholder, a faux-newspaper that was based in the City of Heroes (CoH) universe. Prior to starting the site (in December 2002) there had been a lot of talk of having an in-game newspaper. I was interested in the idea enough to try to get it going, but found when you ask other people to get involved over the internet there is a good chance of getting a lot of talk but little action.

Bloggers are a solitary breed. Long walks on the shore, staring off beyond the horizon, are mandatory. MANDATORY.

I believed in the idea, so wrote all the articles for the first few issues, managed any submissions I did get for later issues (and they were greatly appreciated) and generally kept things ticking over until CoH launched. Once CoH launched I found that I had the option of either playing the game or writing about it, and really preferred playing the game! That said, the Beholder ran intermittently from December 2002 to May 2006, so I did keep it going for a while.

But it taught me an important lesson: having a good idea is often easier than delivering on it, especially if you are relying on support from others. If you want something done, you shouldn’t be surprised if it comes down to you.

Which, in a way, is the essence of blogging. It’s just you and words. Whatever you don’t write remains unwritten.

One Thing Leads To Another

With the launch of CoH came a number of requests from MMO sites looking to increase their CoH content. Generally the request was to absorb the Paragon Beholder into their domain / CoH area, but that wasn’t something I wanted to do. However, I suggested that I could write a CoH- and superhero-column for a site and it was Warcry who agreed first.

I’m not sure that you can put “wrote about a superhero universe for three years” on many job applications, but it was a fun thing to do at the time.

So I started on A View From Atlas Park in February 2004. A lot of the columns are 404 errors now, but I aimed to write a regular comment mainly around CoH (and then City of Villains when it was released) as well as superhero content in general. The column outlasted several CoH Warcry managers (who all seemed very nice during their interactions with me) up to the one who cut me off without much warning. (He went from fansite manager to community manager to MMO developer, so it’s certainly possible to build this blogging thing into a career if you are dedicated enough.)

For my three-odd years of writing CoH columns for Warcry, I earned the princely sum of $0. When I started writing it the idea of getting paid for it didn’t occur and the one time the idea of comping (i.e. paying) my CoH account was offered I turned it down on the grounds of getting a CoH t-shirt instead… except that Warcry had run out of CoH t-shirts so I didn’t get that either.

You should write a blog for the enjoyment of it, but if you ever happen to start writing for an organisation who puts ads around your content and generates revenue from the people who come to read your work, make sure you get paid.

You Feel You Need To Write 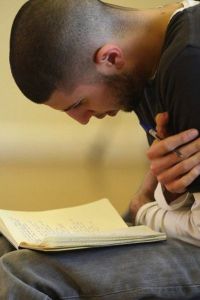 I feel antsy if I haven’t written something in a while. There’s a need there. Maybe it’s just a need to be yelled at by people on the internet. But while writing remains cheaper than professional therapy, I’ll write.

Following the end of my association with Warcry, I started to miss writing. Looking around for a free blog space to write in brought me to MMORPG.com, which in turn saw me launch my own blog there. That first month still has a blog post that I’m very proud of: A Canned History of the Marvel MMO Given It May Be Dead Again. I’m proud of it because it dealt with a topic I hadn’t ever seen covered before and is one that the wider ‘gaming press’ often get wrong because they can only remember as far back as Cryptic’s attempt, not Vivendi’s or Microsoft’s first attempt at a Marvel MMO.

I aimed to write at least one post per week and although my views were never huge, the blog did make it onto MMORPG.com’s Highlighted Blogs for a while. Given my focus on superhero MMOs MMORPG.com’s representatives did discuss the possibility of me being a featured blogger for CoH/V and getting paid for it, but when I wrote three columns and none of them were used (mainly because it seemed to take MMORPG.com ages to put an article up, so by the time it had gone through editorial the information in it was out of date) so I gave up on that.

You Feel The Need To Write For Yourself

After getting annoyed at MMORPG.com and feeling that I didn’t want my content to help them earn ad revenue any more, I started this blog. At the time I wasn’t sure how long it would last, but it’s been two years and I’m still going.

I do enjoy a good car crash too, and the MMO industry is fantastic at delivering them.

In that time I’ve branched out from being so focused on superhero MMOs, mainly because CoH/V no longer holds my interest, DC Universe Online was a spectacular flop, Champions Online suffered from trying to fix CoH/V’s problems but made a whole heap of new ones in the process, Super Hero Squad Online was just too dull and the Marvel Universe Online title is yet to make an appearance. Oh, and Herotopia is perhaps the worst MMO I can remember playing. And I played both Shadowbane Asia and Fury during their respective betas.

Although I am still interested in those kind of MMOs, my blog writing has broadened further to look at MMOs and video games that I’m interested in, or have a story worth telling. I enjoy doing the research for something like the history of the Playboy Party MMO / Facebook app because it is a story no-one else (I’m aware of!) has told.

At the end of the day, I write for me. I appreciate if other people enjoy it, want to talk to me about it, leave me large cash donations in response, etc, etc, but if I’m not enjoying doing this in my spare time and get something out of it, then I would have stopped long ago.

You Live Long Enough, You Evolve

Not all the time and not in place of the blog, but certainly as a way of delivering 1000+ words about gaming in a format that people are more likely to absorb.

26 thoughts on “Newbie Blogger Initiative (#MMONBI) – From There To Here”