Following on from reason number 1, the next big problem that Star Wars: The Old Republic is going to face is that it is going to cost too much.

Cost estimates for SWOR vary from the US$150m mark up to the US$300m mark, which is a big range, but regardless of its true cost it is EA’s self-proclaimed biggest project ever and even BioWare sees it being multiple times bigger than anything they’ve worked on before. The reason is will cost too much is that combination of profit, business practicality and ego I mentioned before, but the development costs are actually what could cause the most problems post launch.

To understand this, you have to look at how MMOs actually make money: box sales, subscription fees and real money transactions (RMT).

The Anatomy Of A Box Sale

When a large proportion of players look at raw box sales figures, there is a tendency to go “box sales x box price = developers / publisher rolling in money”, but this is an incorrect calculation. Publishers don’t see all of the box cost returned to them and game developers certainly don’t from any box you may pick up from a shelf. I’ve done my best to compile some rough figures – rough, because it can vary from publisher to publisher and title to title and the available sources don’t necessarily paint a completely consistent picture – about how a US$50 box cost it broken down.

As a brief explanation, of the $50 you might pay for a title off the shelf, the retailer is walking away with about $15 (or 30% of that cost) that goes into their own business. There can be something like $6 (12%) that goes towards large retailers being able to return unsold box copies, while the actual cost of creating the physical box – DVD, cover art, casing, whatever – plus the cost of getting it to the store can account for about $5 (or 10% of the sale price). This sees something like $24 (or 48%) out of that $50 going back to the publisher / game developer, with the publisher getting the lion’s share. The publisher will also be responsible for things like marketing the title, plus funding the majority of its development and can also be responsible for dealing with licensing issues etc etc.

Now, this is very rough – some publishers can be more flexible, some will drive harder bargins, the box development costs might be cheaper under certain conditions, and so on – but it provides some idea of where the money goes. (For console titles, most of that extra $10 box cost goes back to the console platform operator, so Microsoft, Sony or Nintendo).

Box sales can be very lucrative for publishers and developers.

As far as SWOR goes, EA owns BioWare, so it won’t be necessarily paying royalties directly back to the studio. However, you can bet that LucasArts will be collecting licensing fees off EA wherever possible, which will take away from any box revenue collected. EA will also likely have a big marketing push for SWOR planned (some would say given SWOR’s current hype that push has already started) which this box cost will also be factored into covering. And if that money is going into marketing, it isn’t going back towards paying off those development costs.

So, although SWOR may sell a few million boxes at launch, that revenue isn’t potentially going as far as some may expect – let’s say that SWOR sets a MMO sales record and sells 3 million boxes in the first few months. Some might say, “That’s $50 a box times 3 million equals all the development costs paid off!”, but the reality is that it might be closer to $20 a box in terms of revenue. That’s $60m – a nice bit of change to find down the back of the couch, but nowhere near paying back SWOR’s development costs.

(Not covered here is digital distribution, which is cuts out a lot of the above retail-related costs and are often sold at the same price as a box copy, making it a much more profitable channel for publishers to use.)

Of course, box costs are only part of the story. Let’s move onto subscription fees.

The Anatomy of Subscription Fees

Sub fees are the life’s blood of a MMO, allowing continuous development of a title long after a title has launched. MMOs also generally have the benefit of getting cheaper to operate as time goes on – although some costs scale with the player base (such as customer service), other fixed costs become more consistent as the player base settles down, various rental / payment deals for things like servers and software are paid off or get cheaper as the tech gets older (or the studio can wring more out of the tech it has), publishers may even get see their development funds paid back, and so on. However, for a MMO like SWOR the most expensive days are still ahead of them, so they need a large player base to have a chance of ever seeing that development budget paid back.

There’s also a tendency in the player base to equate all of sub fee revenue as being pure profit back to the publisher / developer, which often leads to calls for more content development in order to ‘earn’ that $15 a month they are paying. The reality is that the sub fee already has a fairly high proportion of it allocated to daily costs. The figures below are even rougher than the ones above, so please take them with a grain of salt. However, there is information that is publicly available that suggests a MMO might run with an operating profit margin of 25% for a new and / or indie title while market leaders can see that rise up to 40% or over.

As a rough guide to how a sub fee breaks down, here comes another chart. 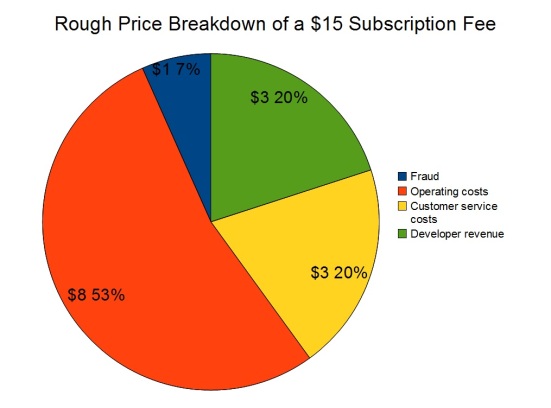 If I’m wrong on this, I’m happy to hear it and will update it with better sources.

First off, my understanding is that losses due to credit card fraud does end up accounting for about $1 from every player. This may be through the use of stolen accounts, stolen credit card numbers or reversed charges, but I’m just going to call it ‘fraud’. MMO operating costs account for the bulk of the game revenue and cover things like developer salaries, bandwidth, servers, server maintenance, licensing fees back to the IP owner, payment systems etc. Customer service costs may include things like forum management as well as trouble shooting player issues. Once all that is taken into account, there may be left over about $3 per player that can go back to the studio in revenue. Following my point above, a profit margin of 25% would be $3.75 per subscription account. 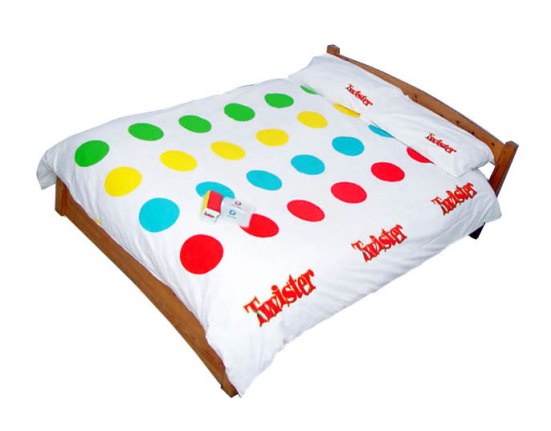 It is from that $3 or so a new title generates the revenue that goes into further development of a title / underlying game engine, plus pay their development debts, plus anything else they want to do with the revenue they’ve generated. This revenue also scales in a linear fashion with the number of players, so 10k players is $30k in profit per month and 100k is $300k per month. Something like $300k per month sounds great, until you factor in that has to cover things like office rent, non-developer salaries, taxes, stationary, staff pizza nights et al. Tabula Rasa had to reportedly make something like US$10 – $15m in annual profit just to break even with NCsoft, you can end up needing a lot of players to reach a ‘true’ profit status.

Again, these are rough costs. Some MMO developers may keep costs low in particular ways that see them hold onto more revenue per sub fee – perhaps they have a particularly streamlined operation, which sees operating costs drop, or run without official forums, which sees customer service costs drop. Some MMOs may also be able to operate on much thinner profit margins if they keep the development team small and external costs down.

It’s hard to say what kind of cost breakdowns SWOR might have to deal with. BioWare is nearly 400 person studio, which certainly sees a lot of salary costs to cover (say an average of $45k per year at BioWare sees about US$1.5m a month going out the door, but of course some of them are working on other titles) but perhaps the power of EA’s current efficiencies or particular design choices could see their profit per sub fee rise above the 20% – 25% level.

As a conservative estimate, taking EA’s suggested break even point at something like 1.1m subscribed SWOR players, this could certainly see EA collect US$16.5m in revenue per month, but only see US$3.3m a month in profit. Together with box sales it would certainly be possible for SWOR to earn EA around US$100m per year in profit… assuming that many people buy it and a strong proportion of those pay the subscription fee.

Although some people like sub fees because they make the revenue maths simple, but they are also a hard limit on how much a dedicated player base can contribute back to the game. Publishers / developers want to earn more revenue where they can, which is where real money transactions (RMT) comes in.

The Anatomy of RMT in a Sub Fee MMO

A developer / development team spends time creating a new costume piece / particle effect / virtual gewgaw. It gets put up on the MMO website where players can pay a small amount of real money to unlock it for their character(s). Once the cost of developing that gewgaw is covered, every other dollar spent on that item is then gravy for developer and can go straight into operating profit.

I expect to see a good number of RMT costume and weapon pieces appear on the SWOR site.

Let’s get back to the original point: SWOR is weighing itself down by costing too much to develop. Sure, in the above scenario I’ve painted a picture where SWOR possibly pays off $150m in development costs in two or so years, but only if it has fantastic box sales and becomes the second most subscribed MMO in the Western market immediately from the time of launch and stays there.

That scenario ignores any kind of spending on continued development – something MMOs need to keep and possibly grow subscriber numbers. And given SWOR’s apparent reliance on voice-over driven story content, those development costs aren’t going to be cheap by industry standards.

It also depends on how patient EA is to recoup their development costs. Perhaps the plan is to pay it off over an extended period, meaning the break even point is kept lower. Regardless, the development cost for SWOR is something that EA may learn to regret. At the costs being discussed, the possibility certainly exists that SWOR could be a massive sales success, attract and keep a lot of players, yet still be a financial failure as a title.

9 thoughts on “Five Reasons Why SWOR Is A High Risk MMO: #2 It Is Going To Cost Too Much”