NCsoft has released their financials for Q1 2010. Following up on my earlier post about City of Heroes / Villains’ performance, I’ve had a look. Sadly, results aren’t good.

Over that time, the South Korean Won has strengthened slightly against the US$, which doesn’t help CoH/V’s reported revenue but isn’t the major cause of the decline.

Here’s a chart of CoH/V’s reported player numbers (that ceased being reported in Q3 2008) versus revenue in $US.

CoH/V's revenue continues its decline. (Click on the image to see a bigger version.)

Q1 2010 was not a particularly big quarter for CoH/V, but revenue dropping by about 15% (using the Won figures) is not what a MMO developer wants  to see ahead of the release of an expansion. Taking the very rough approach of dividing the quarterly figure by (3 x $15 =) $45 to determine approximate active account numbers, this returns a value just over 65k. As previously discussed, this is likely an underestimate by at least 10%, but even so it points to CoH/V having a declining player base that currently probably sits in the realms of 70k – 80k active accounts.

So, what’s driving the decline? Some have said it is the economy and that is likely a motivator, but it’s a poor reason. If you have an entertainment budget, $15 a month for something that can grant numerous hours of entertainment is fantastic value… assuming you are playing those hours. Outside of the repeated Valentine’s Day Event, Q1 2010 held no unique content for existing CoH/V players. 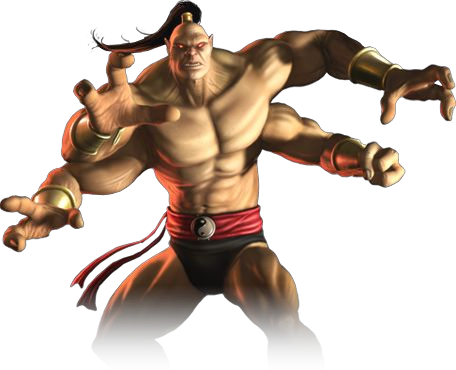 Goro may just end up suing me for name infringement.

The development focus of CoH/V is currently on the Going Rogue expansion. In my opinion, the marketing and communications around GoRo has been awful if they are looking to attract new or returning players to it. The Overview page makes GoRo seem pretty bland and is missing information that the devs have announced on the official forums (e.g. the other new powersets of Kinetic Melee and Electric Control). With launch expected in July, there isn’t that much time to get in front of players and get them interested.

Even the current players I speak to appear to be adopting a ‘wait and see’ approach to GoRo, because although new powersets and features like side switching and Incarnates sound interesting, there isn’t that much information available on specifics. People seem most excited about Praetoria, but even information about how the gray-side is going to interact / intersect with existing blue-side and redside-systems is thin on the ground.

There are also factors like increasing competition in the MMO space, especially among free-to-play titles, that can draw players away. However, in my opinion, the key reason behind the decline is that existing CoH/V players are being given little reason to stay (at least during that Q1 2010 period).

The Words of the Profit

I’ve got no doubt that CoH/V is still a profitable venture, but ‘profit’ always needs to be weighted up in the MMO genre against ‘worth investing further in’. GoRo is the must-win opportunity for CoH/V if it wants to be considered for a reasonable development budget versus being put in maintenance mode. Paragon Studios is working on another MMO so it is reasonably safe from a visit from NCsoft’s axemen, and it continues to hire new people.

Post-GoRo will be an interesting time. As someone who has played CoH/V since launch, I can’t see GoRo reversing the decline that has set in and growing CoH/V outside of its launch boost. At six years old, CoH/V is what it is and to attract new players it would need to change some of that ‘CoH/V-ness’, which requires substantial reinvestment and also risks turning off current players. CoV was only seen to bring in 60 000 new accounts to the player base and that was a whole MMO – GoRo is an expansion that will only provide new zones for levels 1 – 20 and then relies on systems such as side switching and max-level Incarnate changes to keep the players involved.

We’ll see. It will be the quarter or two following GoRo’s launch that will tell the story about CoH/V’s future.