Let’s cut to the chase: having spent a long time manually scraping Kickstarter video game project data and following up each and every of the 366 successfully funded projects between 2009 and 2012, the data indicates that only around 1 in 3 have fully delivered their promised title to their backers. (Data scraping occurred over the last week of December 2013 and the first week of January 2014.)

I did try to infographic it up, but I wasn’t very good at it. MS Charts will have to do. (Image sourced from: I created it)

If you add in the partial delivery rate – a title that has given only part of the game to its backers, such as part 1 when they promised a full game or have given them a mobile app that highlights a mini game or something – then about 1 out of 2 projects have delivered something video game-ish for their support. Which leaves the other half of projects with backers that are still waiting.

As a little bit of context, these the number of projects we’re talking about by year (only having five successfully backed projects is why 2009 looks so good):

Overall were 366 successfully Kickstarted video game projects from 2009 to 2012 inclusive, with 357 of them promising to deliver something by December 2013 in their Kickstarter pitch. (Image sourced from: I created it)

Let’s go back a step and look at what things looked like in October 2012, when I first did this kind of analysis. This was the key chart then:

Previously I didn’t separate out partial and fully delivery, which makes it a touch harder to compare these results. Sorry about that. (Image sourced from: I created it)

For a side-by-side comparison of the results from then versus now, you’ve got to add the fully delivery and partly delivered projects together, so that you see:

2011 is an interesting case, since its increase in overall delivery includes 6 projects that partly delivered something, such only the Android version being released where an iOS version was also part of the Kickstarter pitch,  or where only the first part of a multi-part title has launched (where splitting the game into different ‘episodes’ was a post-Kickstarter decision). Splitting a video game into separate parts or not releasing a mobile version that was part of the original pitch is something that appears to have increased in frequency in 2011.

What I find interesting in looking at these figures is that even though the number of successful Kickstarter video game projects has increased since 2010, the proportion of those delivering something has remained pretty consistent since 2010.

I also was interested to know if the level of funding was having some impact on delivery versus non-delivery – maybe lots of projects weren’t asking for enough money and then ended up running out of steam. If this was the case, you’d expect to see lots of undelivered projects at the (comparatively) low-end of the dollar scale.

This doesn’t seem to be the case. 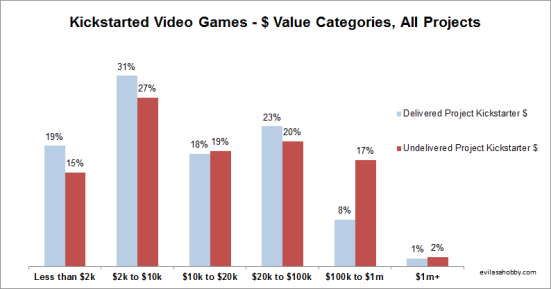 The majority of successful Kickstarter video games raise less than $20k. (Image sourced from: I created it)

I was also curious to know how much Kickstarted video games had ‘outstanding’ to backers (i.e. what amount of money had been received by these projects without the promised title being released). The overall results aren’t good – Kickstarted video games from 2009 to 2012 have more outstanding value to backers than they’ve delivered in dollar terms. Cancelled projects have been excluded from this analysis.

Although I’ve shown all the years from 2009 onwards, 2012 is really where all the action is. (Image sourced from: I created it)

From 2009 to 2012,  projects worth US$16.9m in backer contributions have delivered partly or fully on their pitch, while there is US$21.6m left outstanding in undelivered projects (as at the end of 2013).

To my knowledge little examination has been made of video game titles that receive this type of crowdfunding to see what the outcomes are. The above results, with only around a third of titles fully delivering their pitched titles to backers and more than half of projects are undelivered despite passing their promised delivery date, don’t inspire confidence. For those concerned about backing a video game title via Kickstarter, hopefully the above serves as some information around the risk of this development funding approach.

It’s great that these projects are in alpha or beta or whatever, but what really matters is what they are like when they finish … if they finish. (Image sourced from: Flickr)

A number of these undelivered titles may be in alpha or beta status, on Desura or Steam Early Access. That’s fine, but it’s generally not what backers are looking for when they are promised a full title. (It should also be noted that a number of these undelivered projects also seem to have developers who have stopped talking to their backers and where the ‘official’ website no longer works.)

In looking at when titles are released versus when their Kickstarter pitch said they’d be done, it was pretty common to see delays of six months to a year in length. Although some delays are to be expected, especially on small and / or amateur teams, this kind of risk shouldn’t be underestimated.

If a developer thinks they only need to pay for six months worth of development via Kickstarter, but actually ends up with a project that takes 18 months to complete, that’s a huge gap. Even teams of dedicated volunteers splinter over time (such as was seen with the Embers of Caerus project, which was expected to have an extensive development timeframe) leaving project promises to backers in limbo.

Advice From A Cynic

Following the above analysis, I’m pretty comfortable with not having ever backed a Kickstarter video game and I’m not going to start now. For those who would think about pledging to a project, here is some bits of advice to consider:

I’ve done my best to provide a full and accurate picture of the data I collected. It’s my mistake if I’ve assessed a project incorrectly, such as if a title was fully delivered but I’ve missed that information, and I’ll update the data accordingly.

Also, I was only really interested in tracking if the main game promised was delivered to backers. There are plenty of ‘fully delivered’ projects that have backers chasing the developers over not delivering their pledge rewards, but that’s failure to deliver on a more individual level.

Later this week I’ll post up the data files so that people who are interested in going through it can have the opportunity to tell me how wrong I am.

Also, both Banner Saga and Broken Age delivered something too late in January 2014 to be included in the above list, but even together they only change the delivery rate results by about a percent.

UPDATE 19 JAN 2014: Oh, and to add something I probably should have recognised before – the most subjective part of this analysis will be whether or not I’ve correctly classified a project as fully or partially delivering. I’ve tried to go by what was promised as the backer reward levels, but there’s always a chance I’ve missed something, such as thinking the iOS version was promised at the time of the Kickstarter pitch where it was only an afterthought. My apologies for any mistakes in this classification process. Assessment can be difficult at times given that often key information is hidden behind backer only posts that are unavailable to me.

98 thoughts on “Kickstander: Only Around A Third of Kickstarted Video Game Projects Fully Deliver To Their Backers”