No, not this Doom, and I’m not sure if he’s ever been to Atlantic City either. (Image sourced from: Flickr)

You may have seen the news of a board game Kickstarter that raised over $122k (approaching four times its original $35k target) that has indicated that all the money has been spent, the project cancelled and no-one is getting what was promised. There’s plenty of confusion about who was responsible for what among backers – the authors of The Doom That Came To Atlantic City board game were prominent in the Kickstarter pitch, but the publisher Forking Path is the one who has pulled the plug.

The word ‘fraud’ has been thrown around a lot. Based on the publicly available information, this isn’t the right term; ‘incompetence’ is a better one. Or at least ‘financial mismanagement’. Erik Chevalier of Forking Path says the project is cancelled because all the money is gone, and although it is a good question to ask, “Gone where?”, the key point is that it has been spent without delivering the intent of the Kickstarter. (I do wonder how many people asked where the money was going BEFORE paying up to back the project, but that’s a side issue.)

There have also been calls (that Chevalier has agreed with) that he should refund the money he received or be able to honour the rewards as per the new Kickstarter Terms of Service. Since he’s returned the rights for this game back to the original authors (meaning he can’t deliver on the board game rewards), that only leaves the refund option, but I wonder how strong the Kickstarter ToS really are. To my knowledge I can’t sue someone for not following a company’s ToS; only the company can do that. Would Kickstarter actually sue the people behind a failed project to get backer refunds? That’s an interesting question. Yes, backers may have other legal protections available to them to seek refunds, but I’m not sure that the Kickstarter ToS is among them unless Kickstarter forces Forking Path (and potentially all authors involved in this project) to pay up.

Also, given that Kickstarter appears to have an out clause – that the project creator made a good faith effort to deliver to backers, even if they didn’t deliver – that means that their ToS may not even be applicable in this situation, depending on what Forking Path did with the money.

But this particular collapse just points to me how this kind of crowdfunding shifts game development financial risks around. Please excuse me while I take this one example of a failed board game and re-interpret it in relation to crowdfunding video games.

A Game of Risk

All game development involves a variety of risks, with financial risk being a very obvious one. In short, this risk is around being able to afford to develop a title, release it and then at least break even on those collective expenses. 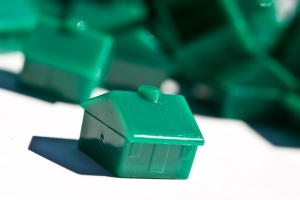 You can mortgage this just like in that other board game, but you won’t be guaranteed of collecting $200 every few rolls of the dice. (Image sourced from: Flickr)

Under a basic model, it is the game developer who accepts all of this risk – they fund 100% of title development and take on all of that risk about the game repaying that funding and then some. This is the kind of risk where game developers can mortgage their houses or take money from friends and family to finance their game.

That’s a lot of risk to bear, and game development can be very expensive, so game developers often sign on with publishers who take on more of the financial risk in exchange for some kind of revenue / ownership rights around the game in question. For all the bitching that occurs around game publishers, studios don’t have to sign on with them, but the alternative is taking on a huge amount of financial risk. You rarely see the developers behind massive flops complaining about all the money they got from their publisher and how it meant they got a regular pay cheque during development (although it does depend on the particular deal).

And now with crowdfunding, there’s another option – game developers can go straight to the project end-users and ask them to fund the development. The game developer gets a cool idea for a game and convinces gamers they can make it, possibly cutting out the EEEVVVIIILLL publisher and retaining all ownership / revenue rights. Plus gamers can be a lot less demanding than publishers in their due diligence and scoping evaluation – gamers want to hear that a game has gotten BIGGER, even if it delays the release of a title. Publishers want to know annoying details and may actually constrain a title’s scope. It would also seem that crowdfunding passes the financial risk for development onto the end-user, while the profit remains with the game developer.

“Okay, you win, you keep all the money. You lose, and you have to pay all of us back and we’ll be angry at you forever and you may never work again. Deal?” (Image sourced from: Wikimedia Commons)

But this is the non-trivial part of the risk: what happens when a crowdfunded title fails? The backer mindset – at least from a number of vocal backers on The Doom That Came To Atlantic City Kickstarter page – is that Chevalier should carry all the financial risk and repay them for failing to deliver. That’s an understandable yet interesting position to take, given that Kickstarter originally opened up to help finance ambitious ideas that might not have otherwise received investor funds (and no, Kickstarter backers aren’t investors, but they fill a similar role). If backers take on the mentality that they should carry no risk – that the Kickstarter delivers, or they get a full refund – then we’re certainly in for interesting times when it comes to crowdfunding.

That kind of approach could end up being worse than being with publisher for a game developer – in this case, Chevalier wouldn’t have spent $122k to get to this point since he’d have known it was up to Forking Path to recoup that cost if he failed to deliver. Instead, Forking Path had their Kickstarter money to spend, so they spent it all and now appear set to try to repay it. Whoops.

As I’ve pointed out before, Kickstarter only really has a one in three delivery rate when it comes to its video game projects. Perhaps the secret of failing to deliver on a Kickstarter project is to do so without telling anyone and just fading away – after all, if you never officially end a project, you can always tell backers it is still going.

5 thoughts on “Kickstander: The Doom That Came To Kickstarter, And The Transference of Risk”