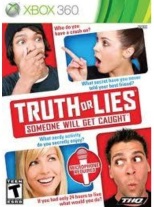 Here is the box art, so you know what to avoid.

A long time ago I wrote a short piece about a title that was going to use voice analysis to determine if someone was telling the truth or lying. The game was called (funnily enough) Truth or Lies and my point was that vocal analysis software to date is completely unreliable, despite various packages being sold to law enforcement organisations in different parts of the world. Truth or Lies was being published by THQ, who seemed to be going through a strange party game phase at the time.

I’d long forgotten about this title. The other day I was fishing through the second hand bin at my local EB and came across Truth or Lies for the princely sum of $4. At that price, it was worth a shot.

I think I want my $4 back now though.

As an Australian, I like to support my local gaming industry, but not when it is this bad.

A Litany of Failures

I’m not sure why you’d lie in response to this question. And that’s a problem if you are trying to create a conflict within the player to cause them to lie.

Let’s look at the problem with Truth or Lies. Starting off with: it doesn’t work.

Vocal lie detection software theoretically works by testing changes in vocal stress against a baseline. Lies (so the theory goes) cause more stress in the voice, changing the vocal signal compared to when you are telling the truth.

The ‘game’ part of Truth or Lies is that questions are presented that you have to answer (into a USB microphone, not the Xbox Live microphone, which no doubt helped destroy Truth or Lies sales further) within about 10 seconds. Truth or Lies seems unable to work out consistently what a lie is – I can say the same string of nonsense syllables, neither truth nor lie, and get wildly varying results. Or you can say something completely unrelated to the question, such as a tongue twister, and again get no consistency on its truth or lie result.

Or you can lie and have it called as true, and vice versa. Results seem almost random at times, although quick answers seem to be judged as more truthful than answers that only start when the clock is winding down.

You repeat the process of answering questions across at least three rounds in a normal game, with scores given at the end of each round. The calculations behind these scores are unfathomable, except that lies see you score less and the truth gives you more points.

It’s also obvious where the interest in developing the game lies, given how it is only really the adult questions that the developers were interested in – the junior questions are very open in nature and impossible to make either the ‘truth’ or ‘lie’ finding meaningful. A paraphrased example is “What is your favourite pop song and why?”. If someone gets ‘lie’, what does that mean? The whole answer is a lie? Or perhaps that one part of that double-barrelled question (i.e. pop song vs the why) is true and the other is a lie? Or just the game got it wrong (which is a very possible result)? 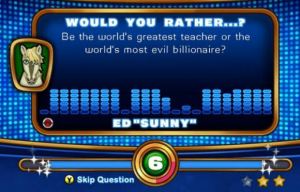 I understand it is a party game (although my experience is that whenever someone starts a party game, the party has long since died) but there are some big issues around responsibility if you are going to claim that you can tell if the answers you get are truthful or fictitious. Being asked personal questions is one thing, but then having them incorrectly assessed is another.

Other gripes is that the announcer is obnoxious and that the game asks you to enter a name to start a profile and then makes up a nickname for you that was obviously pre-recorded. Nicknames include Chips, Mumbles or Cosmo. You barely start the game and you are already being patronised.

About the only recommendation that can be made for this game is that it is an easy way to get 1000 Xbox Achievement points. It’s a rare game that you can early 40 Achievement points for starting a game and then walking away for 10 minutes.

Truth Can Be Stranger Than Fiction

And then THQ turned Truth or Lies into a web series.

You can see all videos – apparently it made it into not just one, but two series – on the Supercool Creative site, who developed them for THQ.

I wonder how this was judged as a success when most of the videos have been watched less than 200 times. Even the most watched videos don’t seem to exceed 1500 views at the time of writing. I have to say the idea isn’t terrible, if you got the right people together who could all riff off each other and the game, but my 60 seconds of watching the show tells me that’s not what they did here.

One thought on “Truth or Lies: I Dare You…”