I can’t actually ever remember anyone outside of Microsoft saying anything nice about Zune. People aren’t always unkind, but most comments are in the polite-without-being-rude area of “but you can do so much better”.

Which is why it feels odd to say something nice about Zune, especially when I’m going to say they have the best online movie services I’ve seen in Australia. (Early disclaimer: I have an Xbox 360 already, which frames part of my findings.) 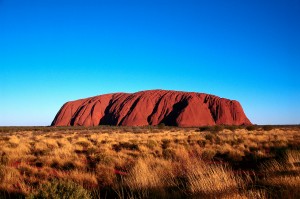 Australia in a nutshell: lots of space, not a lot of people, filled with giant rocks that will steal your soul.

Australia is in an odd place when it comes to online services. We’re a highly internet connected nation, but have to deal with relatively small populations often spread over wide areas.

It often seems we’re a long way down the list of countries considered when launching online services like streaming movies, probably due to the issues just mentioned and rights / royalty agreements that have to meet prior agreements and national laws. (For instance, there is no Xbox Live Indie Games channel in Australia because all games need to be rated by the Australian Classification Board before they can be allowed for sale, and Microsoft has obviously deemed that not worth paying for.)

It’s also a case in that some ways we are technologically advanced – we were on the 3G standard long before it became closer to normal in the US – but we fall behind in other areas (e.g. we’re 40th in the world in internet speeds; the US is only a few spots above, but I believe the ‘average’ result shown for the US doesn’t show how fast speeds are in some areas with high population density).

Online movie services have been one of those areas we’ve fallen behind in. I’ve been looking for a while for some kind of service that means I can download movies when I want and what I’ve seen hasn’t impressed me. At least until Zune, anyway.

I’m going to use my recent experience in wanting to watch “Thor” as a case study. 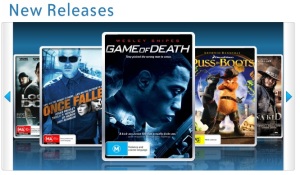 Leading with a Wesley Snipes film was only a good idea sometime back in the early 1990s. And maybe not even then.

Telstra Bigpond Movies: Although the first movie (today) when you arrive on the front page is a new Wesley Snipes film, which doesn’t inspire confidence, Telstra has been improving the movie selection quite a bit since I originally started looking. But as an overall service, it doesn’t work for me. Previous experiences as a Telstra customer haven’t been that positive and I’m not interested in paying the extra $300 for a Telstra T-Box (which isn’t essential, but makes things easier in some ways). Prices are okay, and you get the most advantages from being a Telstra Bigpond customer, which I’m not. I could rent “Thor” to watch for AU$5.99.

Apple TV: It’s there, but it isn’t as attractive as the US option because we don’t get the same level of content. The 1080p box costs AU$129, but I’ve known people to have a lot of issues connecting it up with their PC which has served as a warning bell of sorts for me. I could watch “Thor” on it, but it looks like I’ve have to buy the film off iTunes for at least AU$14.99. This channel might be the winner in terms of available content, but I just wasn’t convinced that it was worth the price required to get there.

Quickflix WatchNow: Quickflix is (arguably) Australia’s answer to Netflix and recently launched its movies on-demand service. The biggest drawback for this service is its limited range – “Thor” isn’t on the list of available films – with the price is about $5.99 to rent a film.

FetchTV: This has launched fairly recently in Australia, backed by one of Australia’s largest ISPs in iiNet. Its movies on demand section is limited to 30 that are updated weekly, but no “Thor” (this week, anyway). It also offers a range of free-to-air and pay TV channels, making it a competitor to Foxtel, but pay TV has always struggled to catch on in Australia and doesn’t hold my interest. The other strike against it is the technology – when I looked at it seriously, it would be very awkward to connect the set-top box directly to my internet line and my house is too old to use the Powerline adaptor method.

Foxtel on Demand: This is available through the Xbox 360, which is a big plus, but requires a pay TV subscription before I can even look at the movies on demand option, which is an even bigger minus. Plus no “Thor”, it seems.

These are Crackle's most popular films. That is all.

Crackle: This is Sony’s entry to video content on demand and it is available on the Xbox 360 (if you have Gold Xbox Live membership, but I don’t), but really, they shouldn’t have bothered. What’s on Crackle is reminiscent of the movies / shows you’d see shoved into the 1am – 6am timeslot: b-grade (and worse) films, obscurities, the odd cult film and overall general filler. It does look to be free. (No surprises that “Thor” isn’t available here either.)

Zune Marketplace: I’d heard such negative things about Zune that I’d never even thought of looking at it for movies on demand on my Xbox; that I even opened it up for movies was by accident. But it was a happy accident, since it was a service that was available to me and had “Thor” for either 340 MS points (SD version: roughly AU$5.70) or 420 MS points (HD version: roughly AU$7). I downloaded the HD version and streamed it – across the entire 1h 40 minute playing time there were no problems with the streaming.

Now, the final cost of renting a film varies by how much you paid for the MS points (I had bought some on sale) but the Zune Marketplace was convenient and effective in delivering me a movie to watch, which is all I wanted at the end of the day. If it meant I was paying a bit more than AU$6 a film, I can live with that. And the range of movies / video available looks to be pretty good too.

And so, at the end of all of that: Zune was the best option for me and something I’d recommend other Australian Xbox users looking for movies on demand to at least eyeball to see if it works for them too.

2 thoughts on “Some Rare Kind Words about Zune”