It took about three days, mostly due to time differences, but I received a working Catwoman DLC code from Chris Z. at Warner Brothers Support. So thank you, Chris Z. 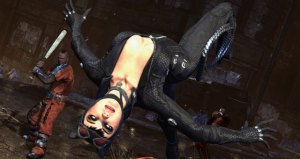 Batman: Arkham City makes sure that you know Catwoman has a lot of front AND back.

I’ll do a longer post on Batman: Arkham City at some point after I’ve finished it. It’s a fun game with an odd narrative tone to it.