The first beta facepalm moment of The Secret World (TSW) beta sign up showed that Funcom wasn’t thinking about how they’d be perceived when they “broke” their own beta registration. This next moment shows that they aren’t really thinking about TSW in its beta promotions much at all.

The second stage of registering for TSW’s beta sees the request go out to take part in a Facebook game to help secret societies grow. See if you spot the bits in that last sentence that don’t make sense.

Looking at the info about this particular event, we see:

“One of the activities players get to do is recruit friends directly from Facebook. Friends who join the same secret society as you can become your agents, which in turn can be deployed in countries on the global map. This will expand your secret society’s influence in that country, and it will help you climb through the ranks of your society!” 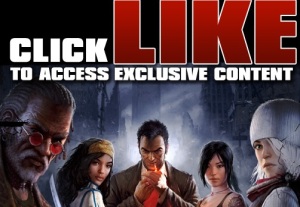 I don't care how much you stare at me, the answer is still "no".

For most other games, this would be a perfectly appropriate approach, but not TSW. After years of build up about secret societies, hidden worlds and things-beyond-the-veil, a key TSW promotional plank is built on Facebook, an entity who’s association with secrecy is about as close as Richard Dawkin’s friendship is with the Pope.

TSW is attracting players who like the mysteries presented by the game concept. I’ll wager that a good proportion of them aren’t going to use a lazy viral marketing technique that opens up their own personal secrecy. Reports are of fake Facebook accounts being set up so that people can register but not give away their real name and other associated things.

Also, this particular approach doesn’t sit very well with the other promotions associated with TSW. In one corner: random puzzle pieces sent to players, weird images and clues to decipher involving arcane obscura,  and dead languages. In the the other corner: click “Like”.

You know what happens to secret societies who are no longer secret? It's just sad, that's what.

We’ll see how this turns out, but my largest objection to this approach is that it appears to be playing it boringly straight: level up on Facebook, help your society. It could have been quite different and darkly playful instead – some sort of slightly cutesy game that sent up the paranormal angle while still dropping hints and lore on the players involved. Instead of recruiting players for a secret society (on Facebook), send player adventurers off to find Yetis, Loch Ness Monsters and other standard cryptozoologic / paranormal fare, along with the odd darker reveal and sly wink that maybe this isn’t just a game after all.

Instead, we get a Secret World with Secret Societies that aren’t very secret.