At some point Microsoft switched the material they print Xbox Live value cards on. For a long time it was a hard plastic card, but along with the switch from Microsoft Points to local currency has come a switch to a hard cardboard card. Here they are, side by side: 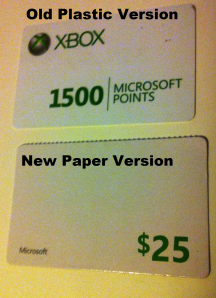 The paper version is made of a thick cardboard – you can see on the top where it tears off from its sales part. (Image sourced from: me)

The point of the card is getting that 25 character string of gibberish into your Xbox account so that you can gain the benefits, so I ended up scratching these cards back to back. Or trying to, anyway.

The silver code protection bar didn’t want to scratch off the plastic card using just a coin, so it required a sharper edge of some keys that eneded up scratching into the code. I stopped before it become too illegible, but some damage was done.

With the paper card, I tried levering off the silver protection bar and was surprised to see it lift in one solid line. “Awesome!” I thought, right up to the point the silver bar RIPPED 10 CHARACTERS AWAY WITH IT. So I had 15 characters on the card and 10 characters still hidden on the silver backing, but now paper thin and fragile. 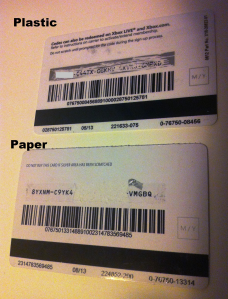 I’ve grey-boxed the first few digits on the plastic card, but I’ve also already used them. Good luck to those coming here to find XBox card numbers! (Image sourced from: me)

Fortunately a bit of thinking made me realise I might be able to see the code on the silver tape with some light behind it, and that worked. But really, in the question of paper or plastic when it comes to these Xbox cards, my initial experience with cardboard have made me prefer the plastic version all the way.