It’s damn hard to convince children that Birdo was (or is still) a male character. 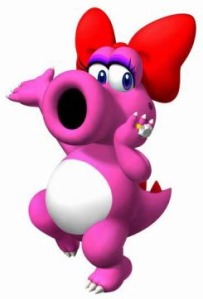 “Listen to the voice in Mario Kart. That’s  a throaty whisper a woman can’t make.”

You may wonder why I’d get into this issue with kids, but it’s important to tell children the truth, right? It’s also a step towards understanding a wider world, even as far as knowing that a number of Asian cultures have long established transgender subcultures, to the point that transgender aren’t as big a deal there as they can be in Western society.

Next up for the kids: the truth about Santa Claus.

2 thoughts on “A Brief Discussion On Explaining Transgender Issues to Children, cite: Birdo”