Extra Credits bugs me. I don’t watch it that often, but when I do I’m left unsatisfied by the end of it. It’s like bad pizza – I like the idea, would love it when done well, pick it up when it’s there but end up regretting the decision to sit down with it.

Probably the biggest thing that bugs me is that it is just so pollyanna-ish about video games. This may seem unfair, given that the whole aim of Extra Credits is to talk up gaming as something serious and worthwhile, but there is a big difference between positive criticism and cheer leading.

Gaming really doesn’t need any more cheer leaders – it has plenty of them, from the corporately funded PR machines to the forum ramblings of fanbois. It doesn’t have much in the way of capital-C criticism, whereby games are considered from different angles, deconstructed and deeply thought about. Some people hate this kind of thing, but if you can’t talk about, say, the role of women in games maturely, gaming isn’t going to evolve.

So, I Google imaged ‘Role of Women in Video Games’ and this turned up as the first image. Thanks Kotaku! I’d suggest video games still have a distance to go…

Extra Credits did an episode on “True Female Characters” and very early on mentioned that no recent games had good examples of True Female characters. The lack of an current example was ignored in lieu of general commentary (that I generally agree with) on genetic versus cultural differences that should be considered in the development of female characters, along with the suggestion that better female characters could be created if these differences were considered. Although true, I’m not sure that this commentary surprised any writers out there, but I do feel it glosses over the issue of a near complete lack of ‘true female characters’ which was the whole point of that 7 minute video.

(Sidenote: using Samus as an example of a female character has always felt a bit hollow to me because she’s a ‘secretly’ female character. The first game revealed her gender as a surprise twist – it was completely possible for you to play Metroid and consider Samus to be male – and then the major title that focused on Samus as a women did it so badly Extra Credits singled it out for specific criticism.)

The other thing that bothers me a lot is the lack of knowledge or research that goes into some videos. For instance, there was the recent 7 minute monologue on MMORTSs and how they haven’t really taken off, then some suggestions for fixing certain concerns. All fine, but who the hell scripts nearly 7 minutes about MMORTSs and doesn’t mention Shattered Galaxy? It’s arguable the most successful MMORTS ever and certainly one of the first to have really captured that genre… but it is ignored by Extra Credits.

There’s a problem when you say you are going to talk on a topic, but ignore key examples of the genre. (I felt the same about their look at the future of MMOs and how there could be (say) MMO platformers, which completely missed the massively successful MapleStory.)

The combination of boosterism, lack of research and a focus that keeps to the popular side of problematic gaming issues ultimately makes Extra Creditz sound hollow for me. If games matter, then it should matter that the topic is properly covered. As it stands, it is the opinion piece you’ll find on most other video game vlogs, just with less swearing and penis jokes.

The more recent drama involving Extra Credits and The Escapist was interesting. Having found a home at the Escapist and having built up a following, Extra Credits’ artist needed surgery on her shoulder that would cost in the realm of US$15 000 to US$20 000. Extra Credits put out the call for donations and in about two days donations came in to the value of over US$62 000.

The end result is that Extra Credits has gone onto its own YouTube channel, the Escapist has a lot of egg on its face and the plan is to use all that extra money to fund independent game development. There are a number of things wrapped up in this particular tale – that RMT works both in-game and in-game-video-requests, that community is core to what you develop in achieving success and that nothing draws attention like drama.

The Escapist certainly ended up the worse off here. Extra Credits built its viewer base by being on The Escapist, but the show is gone and the viewers might leave as well. It’s now public knowledge that 1) the Escapist pays late, if at all and 2) the Escapist is in financial trouble. They end up looking like the Big Bad Publisher, there to take advantage of the little, popular guy who does all the work.

I don’t think it is ‘advertising doesn’t work’ as it is ‘I can barely see any ads here, which means those ad dollars aren’t rolling in’. I did get a female-targeted Special K when I tried to watch Zero Punctuation – someone needs to have a good chat with the media buyer.

(Sidenote: I saw a blog wondering if the Escapist’s funding difficulty came from people becoming immune to advertising. I don’t think that’s the case – the issue is more likely in line with the massive expansion of content providers on the Escapist, which went from its written ‘magazine‘ to having the immensely successful Yahtzee’s Zero Punctuation and then onto 10 to 15 or so video columnists on its site. Obviously the plan was that if one weekly video brought in X viewers, then adding in 15 other videos will bring in 15 times the amount. Reality doesn’t work that way.)

Meanwhile, Extra Credits looks to be in, if not good shape, at least an interesting position.

Having over US$80 000 (US$100 000 minus the surgery costs) to fund independent games development / publication sounds like a good idea for Extra Credits to take on, but while it is nice that they promise to share profits 50 / 50 with developers, it looks like 100% of losses carried by them as publishers. It’s been estimated that only 4% of games that go into development are profitable. The rate is so low because there are a lot of projects that never get onto the shelves – they die before they are completed.

Only 1 in every 25 gaming projects started goes on to make a profit.

Although that could be an artifact of the system under which they are developed, it is hard to develop a title that cuts through and makes money. The point of this fund might not be to make money, but every dollar lost is a dollar not being spent on another title. Not-for-profit organisations still aim to be profitable (or require continuous donations for income) in order to ensure their services are able to continue. 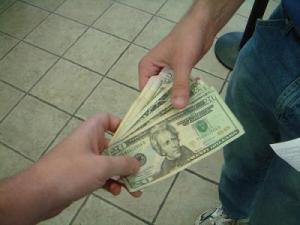 Maybe the Extra Credit fund pulls off a Minecraft or Angry Birds-level success, but those are very rare. If the first few games out of the fund don’t succeed, then this particular publishing model could come to an end fairly quickly. After all, if the fund invests $8 000 in a particular title, that title needs to generate $16 000 worth of profit for Extra Credits to get their money back. (And the key word is ‘profit’, not revenue.)

The other side of Extra Credits’ offer is, of course, the video. The YouTube channel has had three extra episodes (although the third episode is the second part of a look at gaming addiction that itself is split into two parts) and YouTube makes it easier to see the number of views these videos have had. Presumably the team would like to make money off these videos, or else they could have just stayed with the Escapist. How is that going to happen? As a YouTube partner? Requests for donations? Sponsorship from video game companies?

All of these models have potential impacts on the videos released.

So it’s a curious future for Extra Credits. I personally hope that they do make a difference, make games and gaming better, but to date they simply appear to as one of the better produced gaming vlogs who are quite happy to preach to the converted.