Around the start of the year I changed the name of this blog from Vicarious Existence to Evil As A Hobby. The change was motivated by a few factors, but most notably due to my interest in MMOs diminishing.

Back in November 2007, I started Vicarious Existence on MMORPG.com. The name “Vicarious Existence” came from what MMOs offer players – experiencing another world through a representative stand-in character. But with MMOs being on a downhill slide, this name doesn’t really reflect what I’m writing about any more. 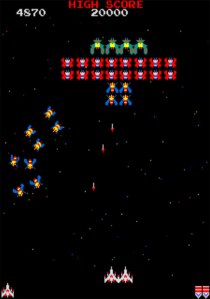 In Galaga, shooting wave upon waves of enemies was a pretty abstract act. A number of currently popular video game franchises – Assassin’s Creed, GTA, Hitman – have completely removed this kind of abstraction. (Image sourced from: The Atari Thief)

So why the name “Evil As A Hobby”?

Last things first. The ‘hobby’ part is really what video gaming is to me. Gaming is my preferred form of entertainment and one I’m enthusiastic about. Plus it costs ($lots$) more than it earns ($0), so it’s a hobby rather than a profession.

The ‘evil’ bit is more contentious. It struck me one day that large numbers of games have gameplay mechanics that would be considered evil in real world situations. For example:

Of course, video games aren’t the real world and the above observations are made slightly tongue-in-cheek. Games are entertainment (and some people want them desperately to be capital-A Art). In most of the above situations these ‘evil’ mechanics are only part of the experience and in some cases attempts are made at narrative justification.

My current avatar is Mr Scratch from Alan Wake: American Nightmare. He’s definitely evil, killing unsuspecting people for the fun of it. Fortunately, your character is out to stop him and the game doesn’t glorify his acts. (Image sourced from: Dual Shockers)

But all of these anti-social acts are done pretty casually – there’s usually no consequence and often a reward on offer for doing things that are abhorrent in real world terms – and often a major part of the expected game experience. You can’t progress unless your character commits the evil acts and to date video games haven’t been a great medium for depicting the emotional consequences of those acts (especially in situations where your character is meant to be a reluctant killer, yet the game gives you special achievements / rewards for murdering everyone you encounter – Max Payne 3, I’m looking at you).

This kind of experience also leads to some odd gaming culture blind spots, like the argument I’ve seen pop up every time sexual assault appears in a video game.  There’s always at least one discussion point that surely murder is a worse crime than sexual assault, but that lots of games feature murder and gamers don’t complain about that. It’s true that lots of games feature murder, but arguably that’s a historical legacy – we’ve gone from shooting identity-less drones in Galaga and relatively bloodless killing in Rolling Thunder to explicit dismemberment in Mortal Kombat and slo-mo shots of exit wounds in Max Payne.

Video games have always been violent; they’re now a lot better in showing it. Like the proverbial ‘how to boil a frog’ example, the change happened over a long enough time that it became mostly invisible. One of the results of this progression is that the ‘evil’ act of killing people is so ingrained to popular video games that is used as a yardstick to downplay the severity of other ‘evil’ acts like sexual assault. It’s a curious outcome.

Perhaps I’m overstating things by summarising all the above as ‘evil’, but Wickedness As A Hobby just didn’t have the same impact to it. I was aiming for a punchy and memorable blog name too!

So anyway, that’s the reason behind the move from Vicarious Existence to Evil As A Hobby.

2 thoughts on “From Vicarious to Evil”