I’m pretty close to getting all of the Xbox 360 achievements on Prototype. I still have to complete the game on hard and also without dying, but that isn’t going to stop me. Nope, it’s the stupid Platinum results for the street races that will stop me – the character controls are awful if you want to do anything with quick precision. A slight adjustment flings you off course while the camera repositions itself to make judging distance difficult.

Occasionally I forget that and come back to Prototype to give it another shot. What surprised me this time were all the billboards featuring the A-Team: 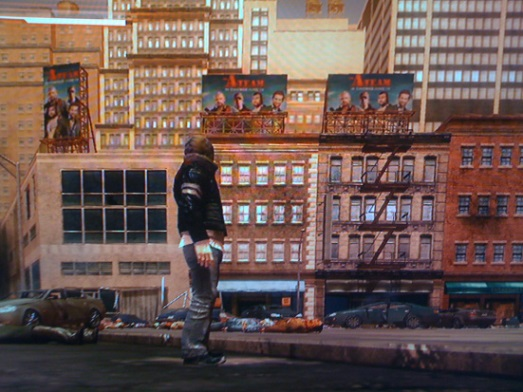 In the midst of a bioterrorism event, it’d be nice to go see a film. What’s on?

Microsoft’s Massive in-game ad service was used by Prototype (and obviously still is). It’d be interesting to know the games package someone paid for that saw “The A-Team” appear in Prototype. Let’s hope they also go into something a little more current and not played by people screaming, “OH FOR GOD’S SAKE GO STRAIGHT NO NOT THERE OH FOR THE LOVE OF GOD THIS GAME SUCKS ARAAHAHGAHAGGHGH”.